A Walk with Leto and The Mathematician

Browse: Home » A Walk with Leto and The Mathematician

A Walk with Leto and The Mathematician 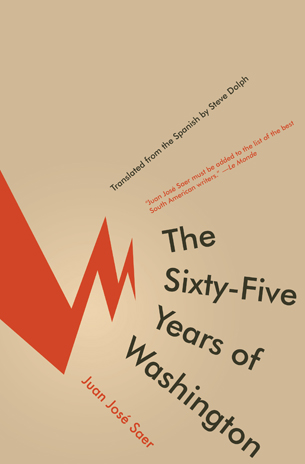 Back in March I quoted a passage from Juan José Saer’s nightmarish novel The Witness, and since much of the poetry I chose to read in Mexico had an Argentine flavor, I decided to read another Saer novel, The Sixty-Five Years of Washington. 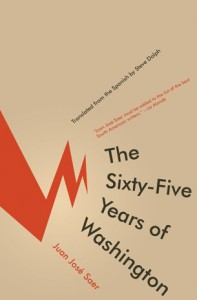 I have to say that the book knocked my socks off, combining as it does a Rabelaisian gusto with a Beckettish humor and something of the obsessiveness we find in Robbe-Grillet. The entire novel takes place as Leto and The Mathematician stroll and chat, think and ponder, remember and speculate, returning always to the story of the sixty-fifth birthday party, which both had missed, thrown for their mutual friend Jorge Washington Noriega. The Mathematician has what he considers an authoritative account to relate, provided by another mutual friend—one who did attend the party—by the name of Botón. About half way through the book our two perambulators are joined by a third friend named Tomatis, who disputes Botón’s characterization of the event, but without clarifying it; in fact, Tomatis makes the “reality” of the party even murkier. Ultimately, Tomatis leave Leto and The Mathematician to finish their walk before they part at the end of the novel.


It is simply impossible to describe the effect of all this. It is comic, but in a subtle way. For example, when Tomatis runs into the other two, he asks Leto, “How’s things?” Leto replies, “Things are good. I’m only so-so.” It is also ominous, because—as the reader slowly discovers—everything that happens is conditioned by the oppressive nature of life in Perón’s Argentina. Finally, it is also luminous because of the way Saer constantly weaves multiple lines of thought, feeling and action together in long, peripatetic sentences, sometimes transparently interpreting the characters, sometimes frankly and/or haplessly addressing the reader directly.


I was so taken with Saer’s style, in fact, that I couldn’t keep myself from typing up two long passages. To me, they are magical—though I realize they lose something out of context. As you’ll see, Saer does not write simply. But then life—I mean life as we experience it, moment by moment—is not simple. Saer seems determined to remind us of our own complexity, not so much to offer answers or some final view of things, but honor the mysteries—some trivial, some profound—that all of us wrestle with every day. I won’t try to prepare you for the various names that come up here; it’s enough to know that all of the characters they refer to attended the birthday party for Washington.

They continue. While they try to appear indifferent and outwardly calm, in the depths of their so-called souls—apparently not translucent but murky, as we were saying, or rather yours truly, the author, was saying just now—they struggle with emotions that anger them and that they would rather not see expressed inside themselves, humiliated by the thought that the other, because of his apparent indifference, is too noble to feel them. In Leto’s case it’s a belief—tenuous, it’s true, but very present—that what just took place was ruined and pretense of superiority toward the Mathematician, accompanied by the shameful suspicion of being excluded from any other sphere in which he might feel equal or superior to him, while the Mathematician, beginning to sense that the happiness he feels at having saved Leto from falling is growing into a kind of euphoria in which he senses certain non-altruistic elements, is filled with guilt. But let’s be clear: assuming that we agree that—as we have been saying from the start—all of this is just more or less, that what seems clear an precise belongs to the order of conjecture, practically of invention, that most of the time the evidence is only briefly ignited then extinguished beyond, or behind (if you prefer), what they call words, assuming that from the start we have agreed about everything, to be clear let’s say it for the last time, though it’s always the same: all of this is just more or less and as they say—and after all, what’s the difference!

However all this strikes you, I’m sure you’ll agree that the translator, Steve Dolph, deserves kudos for creating such masterfully fluid sentences that must be even more challenging in Spanish. He has translated another Saer’s novels, Scars, which I look forward to reading when it’s released in December.