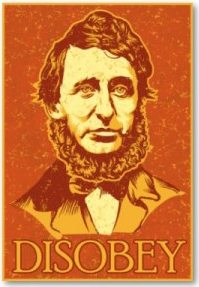 From John Latta’s blog post yesterday—an eloquent (as usual) meditation on several related themes, which ends with this quotation from Thoreau‘s Walden:

Men have an indistinct notion that if they keep up this activity of joint stocks and spades long enough all will at length ride somewhere, in next to no time, and for nothing; but though a crowd rushes to the depot, and the conductor shouts “All aboard!” when the smoke is blown away and the vapor condensed, it will be perceived that a few are riding, but the rest are run over—and it will be called, and will be, “A melancholy accident.”*

We fought a revolution once against the institution of elites in the form of a monarch and his minions, especially the East India Company—a corporation. Now we face corporations and their minions: there is no target as conveniently particular and distinct as King George. This may be why the message of the Occupy movements have not yet become particular and distinct. Power that once was concentrated in monarchs has been dispersed among what Paul Simon vividly described as “a loose affiliation of millionaires and billionaires.”** They make a difficult target; but I doubt that Tom Paine, for one, would be deterred by that. Neither should we.