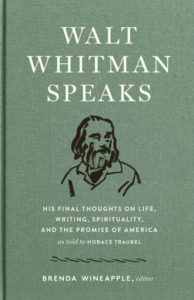 I recently read Walt Whitman Speaks: His Final Thoughts on Life, Writing, Spirituality, and the Promise of America. As the editor, Brenda Wineapple, writes in her introduction that Whitman’s friend Horace Traubel visited Walt Whitman nearly every day in the poet’s two-story row house at 328 Mickle Street, Camden, New Jersey, beginning in March 1888, when Whitman was 69. As a bank clerk, Traubel was proficient in shorthand. “Every day for four years,” Wineapple writes, “Traubel would copy down Whitman’s conversation on scraps of papers, stuff them in his pockets, and then, to keep them fresh, transcribe them immediately on returning home.” By the time of the poet’s death in March 1892, his friend had accumulated about 5,000 pages of transcription.

“I want you to speak for me when I am dead,” Whitman had told his friend early on. “Whatever we do, we must let our history tell the truth…. Do not prettify me: include all the hells and damns.” More than a decade later, Traubel set about to publish Whitman’s words. Two chronologically ordered, unredacted volumes appeared in 1906 and 1908, but they didn’t sell well; nevertheless, Traubel labored at developing a third manuscript, which was published in 1914—the last to appear in Traubel’s lifetime—and 6 more volumes, edited by various scholars, were issued by various publishers between 1953 and 1992. 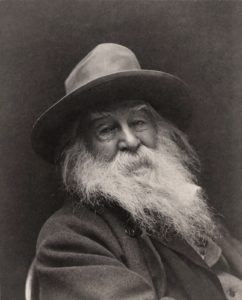 “The sum total,” Wineapple writes, “is extraordinary: an invaluable compendium of observations, insights, overtures, obsessions, and empathy…. But the fact remains that the material begs for compression.” Personally, I find it impossible to imagine how she managed to boil 9 volumes down to 193 pages and 35 subject-matter chapters, including “Nature,” “Leaves of Grass,” “Art and Artists,” “Lincoln,” “Science,” “Religion,” “Mystery, Faith, and the Universe,” and “My Philosophy.”

Here are a few excerpts to provide just a small taste of the book. Whitman’s voice comes through so clearly that the experience of reading has an intimacy and warmth that is unlike the experience of reading Leaves of Grass, which is superbly crafted, by and large, and often overwhelming in its force. Here, instead, is Whitman relaxed and unburdened by the pressures of artistic aims. He’s well worth hearing in this mode.

After culture has said its last say we find that the best things yet remain to be said: that the heart is still listening to have heart things said to it—the brain still listening to have brain things said to it—the faith, the spirit, the soul of man waiting to have such things of faith, spirit, the soul, said to it. Books won’t say what we must have said: try all that books may they can’t say it. The utmost pride goes with the utmost resignation: science says to us—be ready to say yes whatever happens, whatever don’t happen: yes, yes, yes. That’s where science becomes religion—where the new spirit utters the highest truth—makes the last demonstration of faith: looks the universe full in the face—its bad in the face, its good—and says yes to it.

A religion? Well—every man has a religion: has something in heaven or earth which he will give up everything else for—something which absorbs him, possesses itself of him, makes him over into its image: something: it may be something regarded by others as being very paltry, inadequate, useless: yet it is his dream, it is his lodestar, it is his master.

In my periods of trouble—when I am sleepless—lie awake thinking, thinking, of things I ought not to think about at all—am frustrated—worried. Then I recover by centering all attention on the starry system—the orbs, globes—the vast spaces—the perpetual, perpetual, perpetual flux and flow—method, inevitability, dependability of the cosmos.

—Chapter: “Mystery, Faith, and the Universe”

We must be resigned, but not too much so: we must be calm, but not too calm: we must not give in—yet we must give in some: that is, we must grade our rebellion and our conformity—both.