Walt Whitman Spins in His Grave

Walt Whitman Spins in His Grave 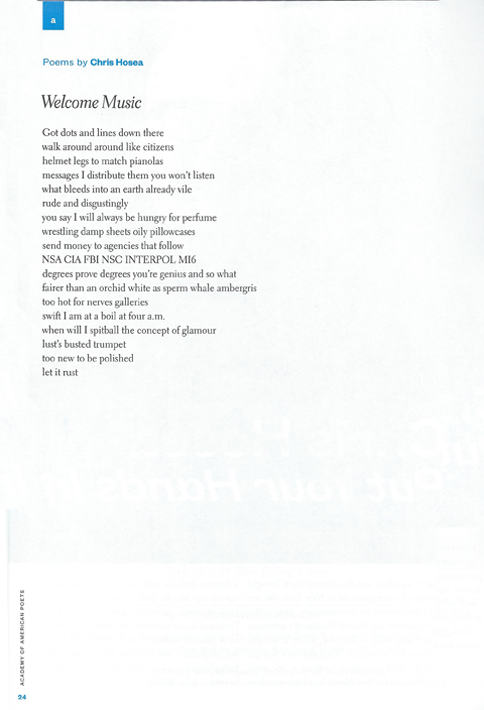 First book awards are apt to be contentious. The major ones—Yale Younger Poets, the APR/Honickman, Cave Canem, the Walt Whitman—produce winners that are as often ignored as praised. In poetry, everything is arguable. But the 2013 Academy of American Poets’ Walt Whitman Award winner is especially distressing. Judge John Ashbery chose Chris Hosea‘s Put Your Hands In, which has been issued by Louisiana State University Press. I have to confess that I haven’t read the book and will not, based on the odious excerpts from it published in the Spring-Summer 2014 issue of American Poets. Here is what Ashbery has to say about Hosea’s book by way of introducing Hosea’s poems:

Exactly a century ago, the Armory show brought European avant-garde art to New York. We are still experiencing its consequences. Among the works on view as Marcel Duchamp‘s notorious Nude Descending a Staircase, which a derisive critic wanted to rename, “Explosion in a Shingle Factory.” Both titles come to mind as one reads Chris Hosea’s Put Your Hands In, which somehow subsumes derision and erotic energy and comes out on top. Maybe that’s because “poetry is the cruelest month,” as he says, correcting T. S. Eliot. Transfixed in mid-paroxysm, the poems also remind us of Samuel Beckett‘s line (in Watt): “The pain not yet pleasure, the pleasure not yet pain.” One feels plunged in a wave of happening that is about to crest.

Now, it’s clear that Ashbery has no idea what to say about the book he has chosen and so falls back on the magical invocation of Duchamp—a value-free gesture meant as an avant-garde stamp of approval akin to “Gluten-Free”. What “subsumes derision and erotic energy” means is anybody’s guess, as is the sense of Hosea’s poems being “transfixed in mid-paroxysm.” It may not be idle to point out that “paroxysm” in its medical sense means “a sudden recurrence or attack of a disease; a sudden worsening of symptoms.” In fact, when one finishes puzzling over Ashbery’s nonsensical praise and confronts the poems offered up as exemplary, the medical meaning seems the most appropriate.

Here are the first two of the three offered up in American Poets. I have scanned the pages because I figured that otherwise I might be accused of making these things up. 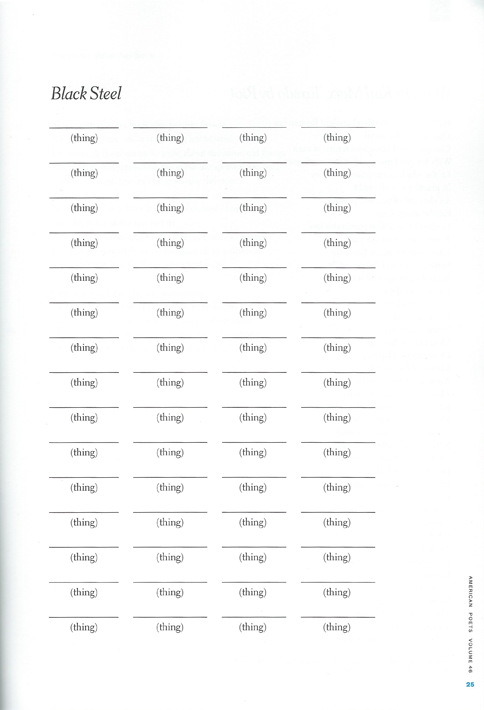 Is it any wonder that this stuff has to depend on the incoherent puffery of John Ashbery, whose poetry has been in steady and sad decline since the mid-1980s? Far be it from me to declare what is and what is not poetry, of course, but if this is what poetry has become, if this is what the poetry establishment—through its inscrutable but lionized master—aims to foist on whatever small audience for poetry remains in this nation, a nation whose idealized image fed the dreams of Walt Whitman and now must leave him spinning in his grave … well, kindly count me out.