Under the Sleep’s New Moon

Under the Sleep’s New Moon 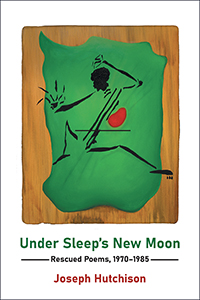 “Not just rescued poems from Under Sleep’s New Moon, but a sustained radiance and thrall that continues to rescue language and the natural world from the maw of capitalism. [Hutchison’s] voice ‘tries on color after color,’ pushing toward an aura we all need in today’s heartless weather. I’ve been admiring Hutchison’s poems for over thirty years, and I’m so glad he took these out from under his magic hat.”

—Mark Irwin, author of Shimmer, winner of the 2018 Philip Levine Prize for Poetry

“Praise to Joe Hutchison for retrieving these early poems and then giving them to us. This reader bows in gratitude to him for his deeply palpable imagery, his arresting and resonant insights. Full of wonderment and wisdom, these poems invite us to hear, up close, ‘the unraveling palaver of our hearts.’”

“The resonance established between visual and aural perception is uniquely powerful in Joseph Hutchison’s work. In poem after poem of this superb volume, the crisp visions which intrude in the middle of daily life trigger what he in one poem refers to as ‘a musical phrase’ which fills the eye in the back of the head with ‘complex electrical activity giving rise to a windchime shiver
of feeling.’ This is a poetry that brings us back to ‘the endless entanglement of the bitter and the sweet,’ allowing us to see once again with ‘the Ancient Light,’ and walk once more ‘hip-deep in deity.’”

—Jared Smith, author of That’s How It Is

“These ‘rescued’ poems by Joseph Hutchison bear a lyrical and ‘difficult witness’ to the outer and the inner world as we know it. Fueled by keen observation, ‘restless shadows,’ compassion, wonder, and a ‘cadence that rocks us,’ this is a collection both expansive and intimate. Here we have a poet’s honest and memorable voyage into the ‘endless entanglement of the bitter and
the sweet.’”

READ A SAMPLING FROM UNDER SLEEP’S NEW MOON HERE