Tyger! (And I Don’t Mean the Golfer)

Browse: Home » Tyger! (And I Don’t Mean the Golfer)

Tyger! (And I Don’t Mean the Golfer) 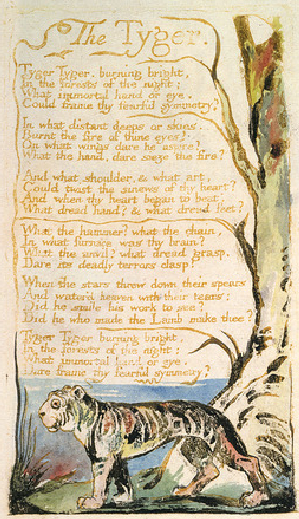 I’ve always wondered about “The Tyger.” Blake’s poems were published not as stand-alone verses but as parts of drawings—”illuminated” poems. Each copy of Songs of Experience, for example, was hand-engraved, hand-printed, and hand-colored.

I’ve included a page from one of the surviving copies. Note, first of all, that the tiger does not look fierce but almost cuddly.

Second, note that it is pictured in a frame—a frame created, of course, by William Blake. What immortal hand or eye could frame the tiger’s symmetry? Blake’s!

And what does that word “symmetry” mean, anyway? A “harmonious or aesthetically pleasing proportionality or balance,” is one meaning that makes sense for the tiger as Blake pictures it. Why would such a symmetry be “fearful”? Here’s where puzzlement takes over for me. “Fearful” means, first of all, “feeling afraid”; its secondary meaning is “causing fear.” So the tiger’s symmetry (“pleasing proportionality”), which is not natural but imposed by the artist, is an expression of fear in two senses: (1) It is an attempt by the artist to control a ferocious force of nature by imposing a symmetrical style; and (2) The resulting image causes fear in the artist—a fear of his own ability to “tame” nature in the image.

Am I lost in the weeds? Not really. “The Tyger” appears in Songs of Experience, a sequence in which Blake addresses “fallen humanity.” My sense of the poem is that in Blake’s eyes—in his frame—the tiger is “fearful” because it is a wild creature drawn in an unnatural way that makes it seem tame. But why should we fear the tiger’s symmetry? Because it is a lie—and lies are the primal stuff of fallen humanity.

It’s interesting that none of this, I think, comes up when the poem is detached from the art—when it is removed from its frame. Which argues (as it needed arguing) for the validity of Visual Poetry. As Vispo, Blake’s poem becomes even richer than it is as a text on an otherwise naked page.