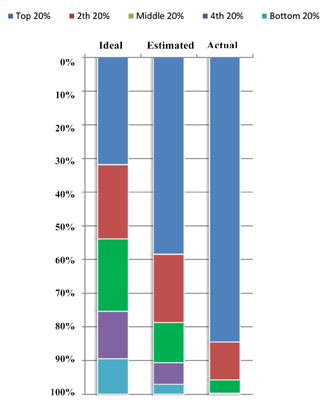 The Actual United States Wealth distribution plotted against what respondents in the “Building a Better America” study said was respectively their Ideal and their Estimated wealth distribution. (As the authors note, because the bottom 40% of Americans have a share of wealth so small—0.2% for the 4th quintile and 0.1% for the 5th quintile—they can’t be graphically represented by the Actual distribution chart.) I’ve rotated the chart, which is presented horizontally in the study, because to me it more accurately represents the top-to-bottom reality we face.

The point is this: respondents across demographic categories simultaneously want a more equitable distribution of wealth in the U.S. and think that wealth is more equitably distributed than it really is. Our situation—the result of three decades of conservative economic policies and ideologically manufactured “facts” from conservative think tanks—really is dire. So, when you hear the word “conservative,” remember that conservatives are those whose policies aim to “conserve” the status quo. And if inequity is your cup of tea, vote conservative!

Filed under: and Tagged: Politics