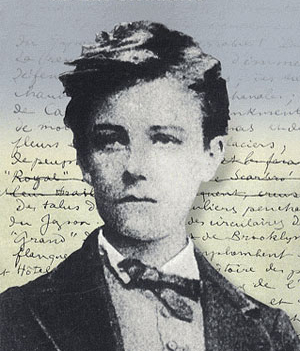 It’s statements like this that drive me nuts—at least when I’m in a certain mood:

I drifted on a river I could not control.

In the other of my most favorite translations, Samuel Beckett begins with

Two magnificent and very different first lines, but rhythmically not that far apart.

The statement is by Norma Cole, a widely-published poet and academic who teaches at the University of San Francisco. (It’s from a blog post on Harriet entitled “Translations of Awareness,” which is filed under Harriet’s “Craft Work” category.) What worries me is the fact that Cole hears Schmidt’s regular iambic line as “not that far” from Beckett’s:

It’s a travesty to jam Beckett’s line into a metrical scheme because it is clearly non-metrical. This is not to complain about Beckett, whose line arguably reflects the sound of Rimbaud’s better than Schmidt’s. Here’s Rimbaud:

But I’m straying from my point, which has nothing to do with translation. It has to do with a widely-published poet and academic who can’t hear the difference between these translated lines. What, then, are we supposed to make of her whole curious post? Her supposed insights into the “craft work” of translation? When those who represent the most “advanced” among us demonstrate an ignorance of the basics, I find myself distrusting their pronouncements on more complex issues.

Whatever we make of it, the fact is that Harriet pipes in this stuff unquestioned and unedited, without providing readers an opportunity to comment. (Of course, no one edits me here—but you Birders and others have unrestricted access to the comment stream, which has often kept me honest—and more important, precise.) It’s all pretty much automatic, isn’t it—as long as one is on the “favored” list (Ms. Cole frequently publishes in Poetry Magazine and is featured in the Foundation’s podcasts as well). It is all distressingly one-way, and a disservice to the poetry community at large.