The Undeniable Genius of John Williams: Stoner and the Man Who Wrote the Perfect Novel

Browse: Home » The Undeniable Genius of John Williams: Stoner and the Man Who Wrote the Perfect Novel

The Undeniable Genius of John Williams: Stoner and the Man Who Wrote the Perfect Novel

This celebration, on the 55th anniversary of the publication of John Williams’s novel Stoner, honors the novelist and his masterpiece with a day of sessions at DU (lunch break on your own) followed by an optional dinner and program. John Williams’ son, Jonathan, will attend this event.

SPEAKERS AND THEIR TOPICS

William Zaranka, PhD — Observations on Williams as a Teacher and Novelist.

Joe Nigg, PhD — My Mentor: Williams’ Lessons on the Life of a Writer.

Anne Marie Candido, organizer of the Williams special collection at the University of Arkansas — Williams’ Archives: The Final Legacy.

Alan Prendergast, Keynote — John Williams: Artist of the Plain. On the austere and subversive storytelling of Stoner. 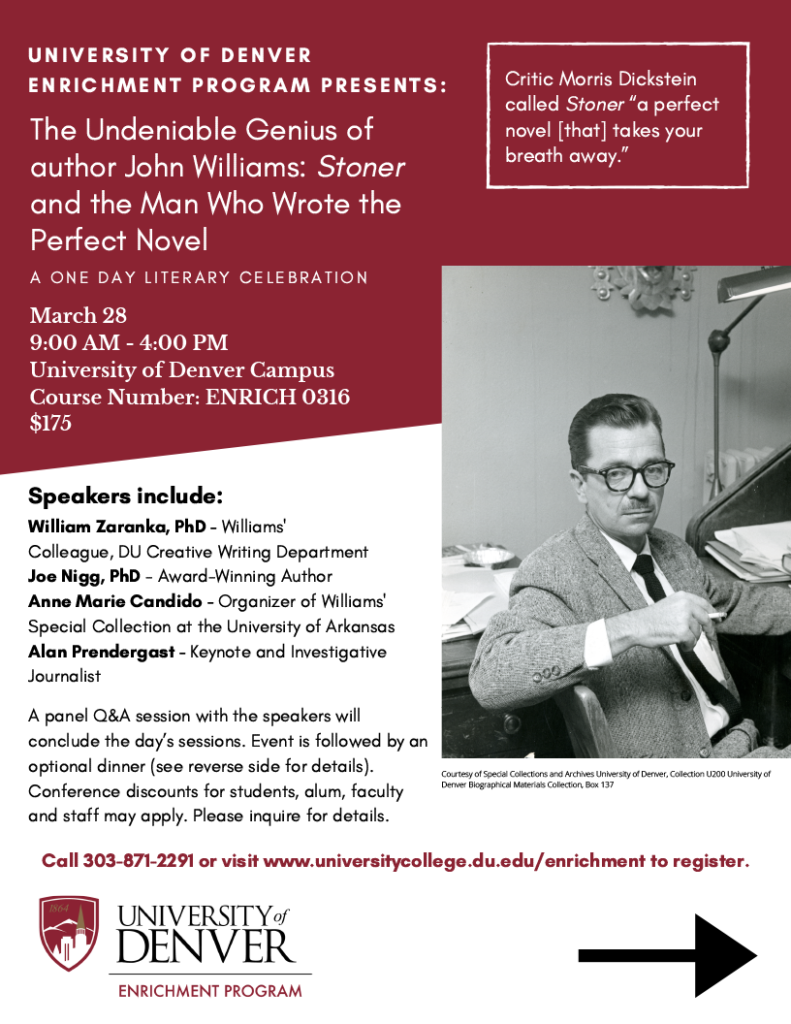 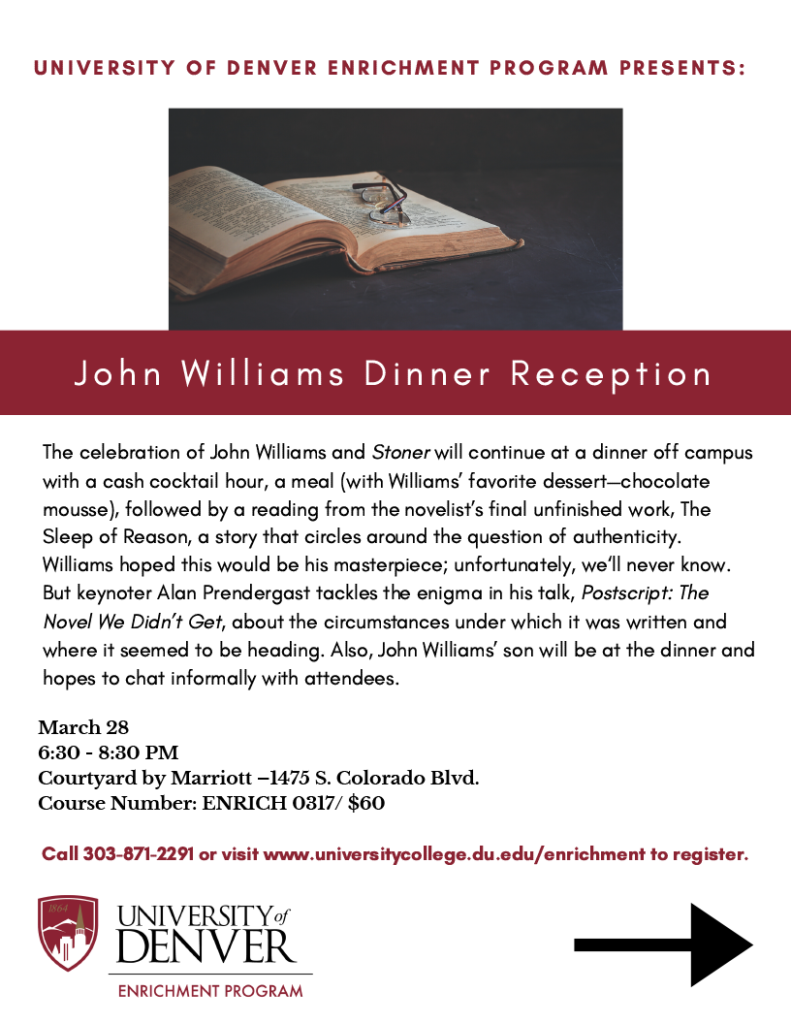 John Williams, novelist and poet, was born on August 29, 1922, in Clarksville, Texas. After holding various positions with newspapers and radio stations in the Southwest, Williams enlisted in the USAF early in 1942, spending two and a half years as a sergeant in India and Burma. Several years after the war, Williams enrolled in the University of Denver, where he received his B.A. in 1949 and an M.A. in 1950. During this period, his first novel, Nothing But the Night, was published (1948), and his first volume of poems, The Broken Landscape, appeared the following year. In the fall of 1950, Williams went to the University of Missouri, where he taught and received a Ph.D. in 1954. In the fall of 1955, Williams took over the directorship of the creative writing program at the University of Denver. Williams’s second novel, Butcher’s Crossing, was published by Macmillan in l960, followed by English Renaissance Poetry, an anthology published in 1963 by Doubleday which he edited and for which he wrote the introduction. His second book of poems, The Necessary Lie, appeared in 1965 and was published by Verb Publications. In 1965 he became editor of University of Denver Quarterly (later Denver Quarterly) until 1970. In 1965, Williams’s third novel, Stoner, was published by Viking Press, and his fourth novel, Augustus, was published by Viking Press in 1973 and won the prestigious National Book Award for that year. All of his novels, as well as English Renaissance Poetry, have been reissued by the University of Arkansas Press. After retiring from the University of Denver in 1986, Williams moved with his wife, Nancy, to Fayetteville, Arkansas, where he resided until he died of respiratory failure on March 3, 1994. A fifth novel, The Sleep of Reason, was left unfinished at the time of his death.