The Self-Incarceration of Clarence Thomas

The Self-Incarceration of Clarence Thomas

Clarence Thomas put forward an argument agains the majority decision on gay marriage that is not just flawed but cynical at its core. The core, in the case, is his argument that (1) human dignity is “innate” and therefore (2) “The government cannot bestow dignity, and it cannot take it away.” Here is how he put it in his dissent:

Human dignity has long been understood in this country to be innate. When the Framers proclaimed in the Declaration of Independence that “all men are created equal” and “endowed by their Creator with certain unalienable Rights,” they referred to a vision of mankind in which all humans are created in the image of God and therefore of inherent worth. That vision is the foundation upon which this Nation was built. 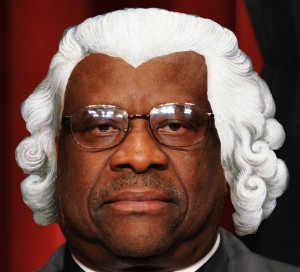 Someone should buy the Justice a dictionary. The word “dignity” has two main meanings (quoting the New Oxford American Dictionary here): (1) “the state or quality of being worthy of honor or respect,” and (2) “a sense of pride in oneself; self-respect”. By this definition, human dignity is primarily a social construct: the society decides which of its members are worthy of honor or respect. Clearly, self-respect can persist within the social construct, but it will have little or no social effect. The sense of self as worthy of respect is neutered, marginalized, even reduced to a kind of fantasy.

Ironically enough, Thomas—who famously played the race card to get himself accepted onto the court—holds up slavery as his leading example of government’s powerlessness in the face of personal pride and self-respect. Against the testimony of former slaves, from Frederick Douglass to Harriet Tubman to Solomon Northup, Thomas argues that “[s]laves did not lose their dignity … because the government allowed them to be enslaved.” Of course, the government did not allow slavery; it created and sustained it; and after slavery was abolished, it continued to oppress blacks. Why? Because the society did not deem them “worthy of honor or respect.” In many states this oppression continues today, though more stealthily than in the past, taking the form of voter intimidation and manipulation of the voting process in black neighborhoods. Thomas wouldn’t know anything about this, of course. He has been deemed “worth of honor or respect” through his elevation to the Supreme Court, at the end of a confirmation process which he accused of amounting to “a high tech lynching.” He wasn’t suggesting that his life was in danger, of course; he was suggesting that his dignity was at stake. Evidently he found small comfort in the fantasy that his personal sense of dignity couldn’t be taken away by government.

Of course, Thomas isn’t bound by definitions or history or logic. He is beholden to an ideology that renders all those qualities irrelevant. Were it not an insult to say it, I’d suggest that he seems enslaved to that ideology, and that his dissent in this case amounts to the high-toned babbling of a mind in chains. The reality, though, is less dramatic. For whatever reason (or unreason), Thomas has imprisoned himself into a very small intellectual cell, though his outsize ambition forces him to pretend that his little corner includes a window with a view of The Truth.

Our ruling elites are full of people just like him. Listen, for example, to Ted Cruz or Donald Trump, if you can stomach it. After a while, you may well feel like I do—that we’re the audience for an ongoing performance of Marat/Sade, with folks like Thomas playing the part of the mad Marquis.