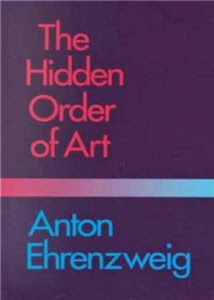 I just finished Anton Ehrenzweig’s The Hidden Order of Art, a rich and sometimes difficult, occasionally jargon-ridden book focused on visual art and, secondarily, on music. But it has a lot to say that applies to poetry, especially in his discussions of the creative process. Here are a couple of excerpts:

In any kind of creative work a point is reached where our power of free choice comes to an end. The work assumes a life of its own, which offers its creator only the alternative of accepting or rejecting it. A mysterious “presence” reveals itself, which gives the work a living personality of its own.

I often tell writing students that they have to let go of what they mean to say and write toward what the poem means to say. They generally look at me like I’m nuts. Poetry is all about “self-expression,” isn’t it? Well, no—it’s about creating an opening for the “living personality” of the poem to express itself.

Perception particularly vision, secures our hold on reality. This is probably why we are so unwilling to accept that perception is unstable, its data shifting and subject to the interplay of the uncontrollable forces within our mind. The most skeptical philosophers have accepted uncritically the sense data theory, which considers the data conveyed by perception as a secure unquestioned basis for our understanding of objective reality. Yet perception has a history; it changes during our life and even within a very short span of time; more important, perception has a different structure on different levels of mental life and time. Only in our conscious experience has it the firm and stable structure which the gestalt psychologists postulated. We have seen how, as we penetrate into deeper levels of awareness, into the dream, reveries, subliminal imagery, and the dreamlike visions of the creative state, our perception becomes more fluid and flexible. It widens its focus to comprehend the most far-flung structures. These different levels of differentiation in our perception interact constantly, not only during the massive shifts between dreaming and waking, but also in the rapid pulse of differentiation and de-differentiation that goes on continually undetected in our daily lives. It is extremely difficult to hold on to the interludes of dreamlike ambiguity and broader focusing that are interspersed among the sharper images of conscious memories [emphasis mine]. It requires perhaps singular powers of introspecting into the stream of consciousness to remember or rather to reconstruct the innumerable twilight states strung out between the more sharply crystallized gestalt structures of our memory.

I emphasized the statement about “hold[ing] on to the interludes of dreamlike ambiguity and broader focusing” because I think this function is the key function of poetry. (I mean poetry on the root sense of “to make or compose”: anything, that is, produced by the shaping actions of imagination.) Evolution has granted humans—and who knows, maybe all animals—the gestalt ability to differentiate coherencies from the undifferentiated flow of the “stream of consciousness.” I think Ehrenzweig is right that art springs from the impulse to wrestle with ambiguities as opposed to “the more sharply crystallized gestalt structures of our memory.” When readers say that a poem has made them “recognize” something, see something they’ve always known but somehow didn’t notice before, they are talking about the way poetry, like all art, discovers and gives form to coherencies in the stream of consciousness that would otherwise pass by without notice.

Why would we not notice? Perhaps because we have evolved on a “need to know” basis: we notice what helps us survive, what helps us get food, shelter, sex, nurturing social structures, and so on. But this gestalt ability distorts reality (not objective reality, but perceptual reality), which in effect alienates us from a full appreciation of our own existence. Poetry attempts to notice, encourages us to appreciate, and therefore reduces our sense of existential alienation.

Oddly enough, even when a poet deals with the theme of alienation (the bread and butter of Modernism), the poem itself expresses solidarity. We might even say that Ehrenzweig’s “mysterious presence” is the very spirit of solidarity—the secret life we hold in common.