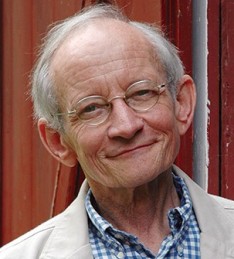 It’s been my privilege to be a steady if not close friend of Ted Kooser for many years, ever since he first accepted some of my work for publication in his sorely missed journal The New Salt Creek Reader. I’ve eagerly snapped up each of his books and think of him now as more of a companion than a writer. I think that’s because he makes me, a thousands more like me, feel that he’s speaking to me—not to a bust of Shakespeare or a 3-D printing/sculpture of Ashbery, but to me as a fellow human being. Not enough poets seem to aspire to such things these days.

Late last year Ted published two books, one a collection of poems (Splitting an Order) and the other a gathering of prose pieces (The Wheeling Year: A Poet’s Field Book). Both are wonderful, classic Kooser (if one can be a “classic” while still among the living), and cannily presented. By that I mean that the former is clearly verse, while the later is clearly prose—but both are poetry. Calling The Wheeling Year a “field book” allows the poet not to scare off readers by offering them prose poems, which is what these prose pieces are, in my opinion. The “field book” frame also gives the poet a calendrical structure that lend his inventive observations a feeling of inevitability and rightness, like singing bowls tapped with a padded mallet to release the sounds hidden inside them.

Here is a sampling from each book. 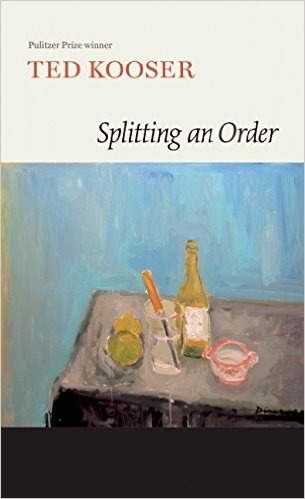 I like to watch an old man cutting a sandwich in half,
maybe an ordinary cold roast beef on whole wheat bread,
no pickles or onion, keeping his shaky hands steady
by placing his forearms firm on the edge of the table
and using both hands, the left to hold the sandwich in place,
and the right to cut it surely, corner to corner,
observing his progress through glasses that moments before
he wiped with his napkin, and then to see him lift half
onto the extra plate that he asked the server to bring,
and then to wait, offering the plate to his wife
while she slowly unrolls her napkin and places her spoon,
her knife, and her fork in their proper places,
then smooths the starched white napkin over her knees
and meets his eyes and holds out both old hands to him.

THE WOMAN WHOSE HUSBAND WAS DYING

She turned her eyes from mine, for within mine
she knew there wasn’t room for all her sorrow.
She needed a plain that she could flood with grief,
and as she stood there by the door I saw the distance
before her slowly filling, as if from hidden springs,
and she stepped outside, and placed one foot
and then the other on the future, and it held her up.

How much it must bear on its back,
a great ball of blue shadow,
yet somehow it shines, keeps up
an appearance. For hours tonight,
I walked beneath it, learning.
I want to be better at carrying sorrow.
If my face is a mask, formed over
the shadows that fill me,
may I smile on the world like the moon. 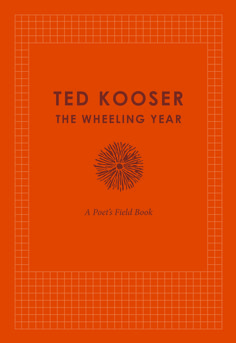 For a girl pouring water into the cappuccino machine from a spotted carafe at the Quik Stop at eight in the evening, an old man is as difficult to look at as a page of homework. On the counter next to the register, her geometry book likes heavy, brown, and unopened. Her notebook has phone number scribbled all over the cover. What’s the point of learning to be old, she is thinking, when that is something she will never have to use?

In this jar, just the weight of a heart, we have dark sorghum molasses, from an old woman’s hot sorghum patch next to a slough. Delicious in cookies, on pancakes, or cornbread. All natural ingredients: the waxy light that slides from willow leaves, the clatter of frogs, the invisible territory carved out of the summer and claimed by a red-winged blackbird, yellow clay of the sole of a comfortable shoe, itch of a chigger bite, light footfall of woodtick, a little flour from a cotton apron, the grassy fragrance of an old straw hat, arthritis, diabetes, high blood pressure, a few muttered judgments on neighbors, and the hard rubber tip from a cane.

I woke this morning thinking about a friend who died three years ago of cancer of the brain. She spent her last months reading, books, packing her painfully swollen head with words that she would soon be taking into silence. From under her turban her blue eyes shone. I thought it peculiar that she would use up what little time she had left on learning, that she didn’t want to be outside in the last of her seasons, an autumn and a winter, the cheerful yellow leaves, the immaculate snow, but I had forgotten—how could I have forgotten?—how much pleasure there is in being lost to time, alone with a book.