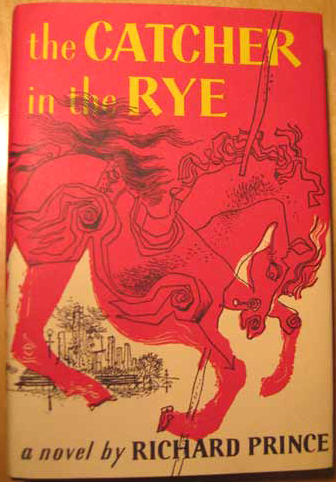 Con man Kenny Goldsmith indulges his mania for the idiotic once more on Ruth Lilly’s dime with this Harriet blog post about what he calls “a terribly ballsy move”—the reproduction of copies of The Catcher in the Rye with only one change: author J. D. Salinger’s name replaced on the cover with the name Richard Prince. Who is Richard Prince? An überphony like Goldsmith, but with big bucks in his bank account. And what has Prince accomplished with “his” version of Salinger’s book? According to Goldsmith, it is “a new appropriation work” that is “so radical and so daring” that Goldsmith can only drool in wonder:

Prince’s The Catcher In The Rye [Goldsmith opines] is no trifling gesture. It’s a profound work of appropriation, but because Prince has money, he can afford to settle with the Salinger estate in ways that conceptual poets couldn’t possibly imagine. If I, for instance, had appropriated Salinger, due to my meager financial and marginal cultural status, I’d probably be left alone; if Richard Prince appropriated a day’s copy of The New York Times, as I did with my book Day, he’d be sued, whereas I was ignored.

Poor lil’ ol’ marginalized Kenny! Ignored for his “appropriation” of an issue of the Times—an act of uncreativity that surely deserved … what, exactly? Apparently The Anschutz Distinguished Fellow Professorship in American Studies at Princeton University wasn’t enough, nor his May 2011 participation in “A Celebration of American Poetry at the White House“.

The fact that these two fools can earn a tidy living doing what they do just proves the truth of this observation by P. T. Barnum: “Nobody ever lost a dollar by underestimating the taste of the American public.” But then it really isn’t the public being conned, is it? It’s the credulous dimwits who operate America’s institutions of “higher learning” and “cultural advocacy,” and of course the clueless one-percenters who can collect the likes of Prince without fretting over the future of their investment. After all, a few million here, a few million there, is just chump change to them.