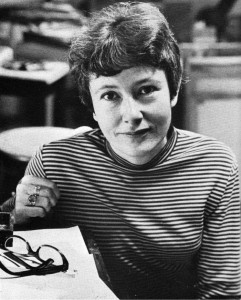 I’ve lately been rereading Denise Levertov—always a refreshing pleasure. Here’s the poetic preface to her 1959 collection, her third book, With Eyes at the Back of Our Heads. The poem is a translation from the Spanish poem “El Artista,” which itself is a translation from the original Toltec poem, “Toltecatl,” written in Nahuatl probably between the 10th and 12th centuries CE.

The true artist: draws out all from his heart,
works with delight, makes things with calm, with sagacity,
works like a true Toltec, composes his objects, works dexterously, invents;
arranges materials, adorns them, makes them adjust.

The carrion artist: works at random, sneers at the people,
makes things opaque, brushes across the surface of the face of things,
works without care, defrauds people, is a thief.

Were Levertov not a woman, and had she not devoted several books of poems to a fierce and uncompromising political commitment, she would be widely recognized as among the greatest English language poets of the 20th century. That recognition may come, of course—the day when her work is as enthusiastically embraced as that of Eliot, Pound, Stevens, or Lowell.

A poem that is clearly a blood relation to “The Artist” appears toward the end of With Eyes at the Back of Our Heads. Levertov titles it “Xochipilli” (pronounced shok e PiL le, “Prince of Flowers,” who was “the Mesoamerican god of summer, flowers, pleasure, love, dancing, painting, feasting, creativity and souls” [the Ancient History Encyclopedia]). 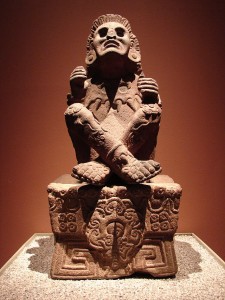 Xochipilli, god of spring
is sitting
on the earth floor, gazing
into a fire. In the fire
a serpent is preening, uncoiling.

“From thy dung
the red flowers,” says the god.

By the hearth
bodies of hares and mice,
food for the snake.

“From thy bones
white flowers,” says the god.

Rain dances many-footed
on the thatch. Raindrops
leap into the fire, the serpent hisses.

“From this music
seeds of the grass
that shall sing when the wind blows.”
The god stirs the fire.