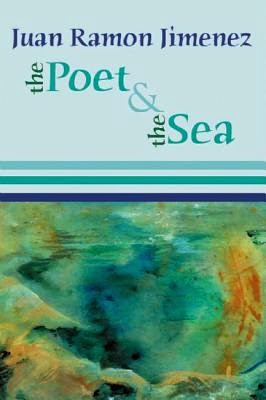 The great Juan Ramón Jiménez often drew inspiration from the sea, and a great many of his sea poems are brought together in The Poet and the Sea, translated by Mary G. Berg and Dennis Maloney. What follows is one of my favorites:

February 11
To Joaquín Sorolla
Suddenly, the afternoon opens out, like a golden fan, a great royal illusion. What a sense of wellbeing fills us, what happiness! You’d think Turner were seeing it with us… Seagulls whose arrival we didn’t notice, that no doubt were here already, fly overhead, in the flags waving from the mats, how far from the sky and how high above us! The sky rises up, moves away, disappears, no longer has a name, is no longer sky but glory, calm glory, altogether opal, not quite yellow. The sea ripples in a new way and seems, while ever more fluid, as the sky rises as the sea sinks lower and lower, ever more liquid. Barrels and times float on the tide. We leave behind some little fishing boats… Are we arriving?
The setting sun tints the port-side railing rose with a nostalgic ray of light. How joyous the red is fused with the rose, on the life vests; how soft and white, fused with the rose, on the handrail; the blackness of that black woman, the olive tint of that Japanese: how beautiful all their eyes are, everyone’s hair, all their mouths in the sunset! What brothers they all are—Blacks, Whites, Asians—in their happiness! I listen eagerly to the melancholy voice of the man who smokes opium. I answer this man who works on commission, although I haven’t spoken to him during the entire voyage. I avoid the smoke of the friar’s cigar… Their faces, glowing in the sunset, reflect their imaginations. There is singing, running about, no one wants to go down to eat, people turn their faces toward the warm fresh breeze that comes from the new land. Toward starboard, below in the shadows, those who do not sing or dream or love pace back and forth.
The moment seems like a song lifted out of a dream, in which we are heroes. Yes, we are truth, beauty, the eternal strophe that endures, captured in rhyme, in the most beautiful glimpsed center of an eternal poem we always recognize, and are always expecting to encounter anew—the second quatrain of a pure marine sonnet?—Where are we? What time do we live in? From what novel have we emerged? Are we a picture? Are we arriving?
But the picture fades and is extinguished. Never has an afternoon been so extinguished! The sky lowers again and the sea rises, and they leave us as small as the day. Again, anxious attention to the schedule, fog, cold noses, the short distance, the little time left. Those of us who were conversing a minute ago, we unfurl our silences now. I stroll alone along under the dripping canvas of the portside deck. Again, we feel we’ll never arrive, shove the hours ahead with our imaginations, sailing in one time in two ships, curse the smooth, boring, insipid sea, the eternal black marble veined with white—yes, marble!—on one side and the other of the heavy ship, this great smelly bear… The page slips from my hand… I no longer know how to write…

When Jiménez received the Nobel Prize in 1956 he was unable to attend the ceremony. His wife of forty years, Zenobia (née Zenobia Camprubí Aymar, a poet in her own right, a feminist and Spanish translator of Tagore), had died two days after the prize was announced; and so, “besieged by sorrow and sickness,” Jiménez remained in Puerto Rico where he’d lived and taught since 1951. The Rector of the University of Puerto Rico, Jaime Benítez, accepted the prize on Jiménez behalf and made this most telling remark: “Juan Ramón is such a poet that his every word reflects his own internal kingdom.”