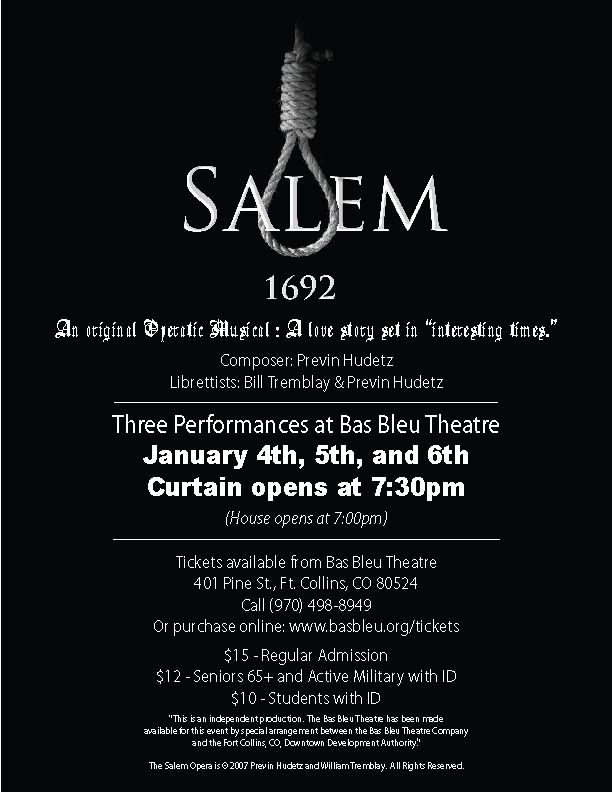 My old friend and fellow poet Bill Tremblay has written the libretto for this “operatic musical,” and in response to an email from me had this to say:

Although many Salem women and some men were put to death in the midst of mass hysteria, Previn as composer and I as librettist don’t indulge in creating evil characters. The Rev. Parris, e.g., is a recent widower who feels adrift without the anchor of his wife. When his daughter Elizabeth comes down with a fever Dr. Griggs can’t diagnose he concludes that it’s a case of witchcraft which he tries to protect her from. Margaret Scott, the female lead, is a young woman lately come to Salem to start a new life. She’s in my view the focus of the drama; she’s the only one with a definable “character arc.” She goes from a newcomer, shy, timid, to a person who admires Bridget Bishop, a strong, independent woman hated by the village women because she runs a tavern. They accuse her of “turning [their] husbands into swine.” “Not hard to do,” Bridget quips. Meanwhile, young Richard Saltonstall lately returned from King Philip’s War and the Sheriff vie for Margaret’s affections. By the time Margaret has fully identified with Bridget she rebukes the townspeople and is arrested herself. The whole thing ends on Gallows Hill.

I hope one day Bill publishes the libretto. It sounds like something to read alongside The Crucible, since the country seems intent on reliving the McCarthy Era.

Filed under: and Tagged: Bill Tremblay