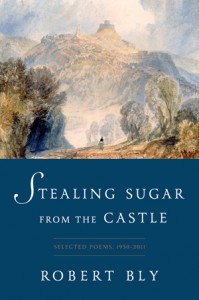 Laurie Hertzel of the Minneapolis Star-Tribune paints a tender portrait of Robert Bly reading last week at the University of Minnesota, with some assistance from his friend and fellow poet Thomas R. Smith. Bly’s new book, Stealing Sugar From the Castle: Selected and New Poems 1950-2013, almost (unbelievably) escaped my notice, but my copy is on the way.

I’ve noted before the influence Bly had on me when I was first trying to write poems. Pace Harold Bloom, there was no anxiety in it, although I did, in the end, have to give up my attempts to write in the “deep image” idiom, only because I found I cared almost more for sound than I did for image. In some quarters Bly is viewed as an inferior poetic musician (one poet-friend of mine accused him of having “a tin ear”), but I’m not of that party; Bly has written some of America’s most musically beautiful poems—poems like “October Frost”:

Last night the first heavy frost.
Now the brave alfalfa has sobered.
It has folded, as if from great heat,
and turned away from the north.
The horse’s winter coat has come
through the bark of the trees.
Our ears hear tinier sounds,
reaching far away east in the early darkness. 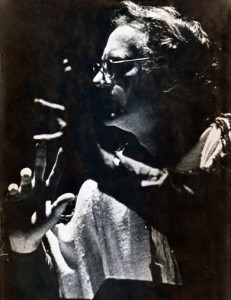 Not all his poetry aims for this kind of music, I think, because whenever he faces the Hobson’s choice of imagistic richness or perfected sounds, he yields to the force of the image. It’s an aesthetic decision that I honor, even though my own practice leans the other way.

Whatever may be said about Bly’s work, it’s hard to argue with his exemplary independence, his commitment to raising the awareness of American readers about poets from other traditions, and his insistence that poets have a right and an obligation to address public issues. Has any other writer since the end of WWII accepted a prize like the National Book Award, then immediately and publicly turned the prize money over to a group opposed to any of our wars? Not that I can recall.

In any case, for me Bly will always be the wild poet with the colorful poncho billowing like wings around him as he recited from memory ferocious poems like “The Busy Man Speaks” and sublime mystical poems like “Looking into a Face”. I feel lucky to have breathed the poetic atmosphere with him for the last several decades.

Looking into a Face

Conversation brings us so close! Opening
The surfs of the body,
Bringing fish up near the sun,
And stiffening the backbones of the sea!

I have wandered in a face, for hours,
Passing through dark fires.
I have risen to a body
Not yet born,
Existing like a light around the body,
Through which the body moves like a sliding moon.