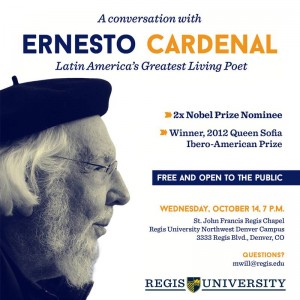 Last night I had the luminous experience of reading beside Ernesto Cardenal. This was a hastily put together event on the Regis University campus, in the St. John Francis Regis Chapel. Despite the late notice of Cardenal’s appearance (most folks didn’t hear about it until the day of the event), an audience of 50 or so mostly young people turned out to hear him.

My old friend Victoria McCabe had emailed me the previous afternoon to ask if I could help out by reading the English versions of Cardenal’s poems. The poet wanted his poems read by another poet. Would I consider it? Silly question. I told her yes, and so last night I found myself sitting at the table pictured below. (Because I was at the table myself I didn’t get a shot of everyone during the reading. I’m hoping an audience member or two captured the scene and will send me the photo so I can replace this one.) The plan was that I would read the English version of each poem first, after which Cardenal would read the Spanish original. 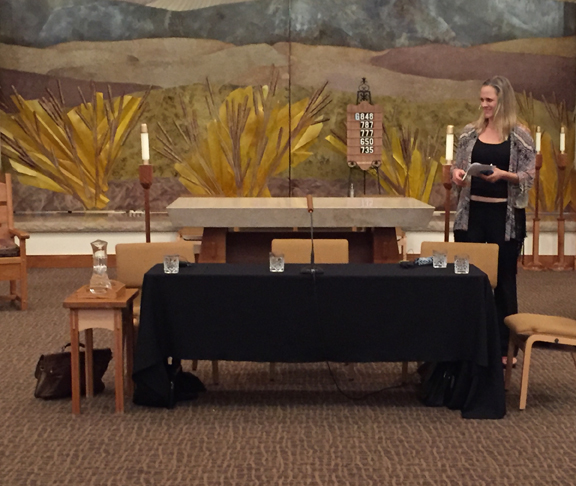 Martina Will de Chaparro, who organized Ernesto Cardenal’s visit, surveys the set-up before the reading begins. Right to left, the chairs were occupied by Martina (who introduced me), Fernando Álvarez Lara (the chapel’s liturgist, who introduced the poet), Sr. Cardenal, and me.

I have to admit I was nervous. Ernesto Cardenal is a poetic hero of mine. I’m told that Cardenal himself, upon being asked to name the greatest poet of the 20th century, responded: “Ezra Pound”; but in my opinion Cardenal is greater than Pound, based on the scope and imaginative power of his masterwork, Cosmic Canticle. Pound’s The Cantos suffers from its author’s fascism, his crank’s misapprehension of history, and of course his vicious anti-semitism; it is a gold mine for Ph.D candidates but a dreadful mess for even committed readers of poetry. (I confess to getting through it only with the help of Carroll F. Terrell’s encyclopedic A Companion to The Cantos of Ezra Pound.) By comparison, Cardenal’s Cosmic Canticle benefits from its author’s capacity for compassion (found almost nowhere in Pound’s work), his deep understanding of science, his coherent and profound vision of human beings as expressions of an inspirited Nature, and—I may as well say it—his sanity.

Sitting beside Cardenal was a privilege, and I was especially grateful that he’d chosen to read exclusively from Cosmic Canticle, because I had read straight through it twice—in John Lyons’ excellent translation—and so had a decent grasp of the poet’s tone, his humor, his fondness for sudden shifts in register, and his overall spirit of gratitude and celebration. Overall, I think the evening went well, though I have to admit to some concern when I first met Sr. Cardenal. I tend to think of writers I love as being eternal, but Cardenal turned 90 this past January, and Colorado’s altitude was affecting him. He was on oxygen and walked with a four-footed cane. He slumped slightly at the table as I’d read a poem in English, but when his turn came he seemed to straighten; an invisible energy would rise through him and pour out in a fiercely cadenced Spanish. His hands lifted with the rhythms, or stabbed the air, or lightly slapped the table. Sometimes he’d make an introductory statement, which Fernando (sometimes in consultation with Martina) would translate into English, and when the translation was done Cardenal would point his maestro’s finger at the page in front of me: Begin!

It’s for members of the audience to judge how I did. Personally, I felt like I was speaking in a dream, and I have no idea whether I did well or poorly. Though when it was over, Ernesto (by then he seemed Ernesto to me) shook my hand and smiled, then kindly signed my copy of Cosmic Canticle. When we posed for this picture, he put his arm around me and gave me a hug. Hence the look of cockeyed self-satisfaction on my face! 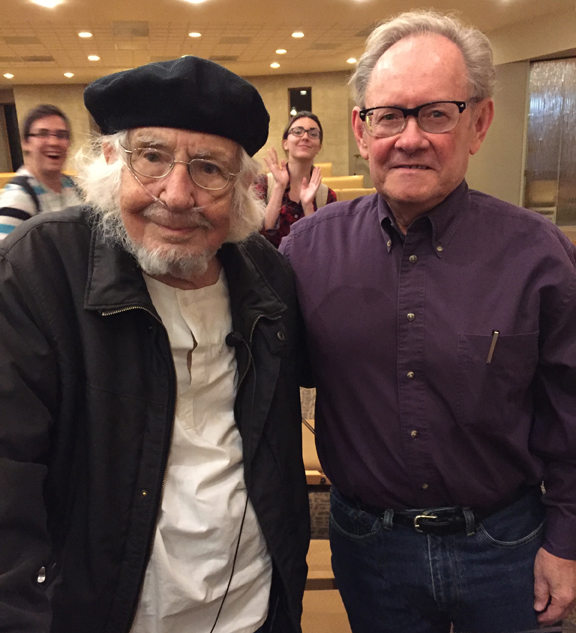 Ernesto and Me (and some delighted students in the background)