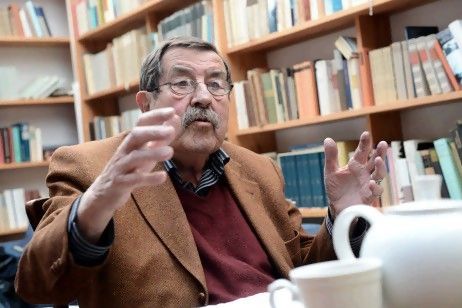 I suppose it’s appropriate that Poetry Month should witness the international furor created by the great German poet and novelist Günter Grass with his poem “What Must Be Said.” (So much for Auden and his assertion that “poetry makes nothing happen.”) There are now several translations of the poem available, each of which has something to recommend it; but this is my favorite as a whole, despite an awkward patch or two:

WHAT MUST BE SAID
Günter Grass / Tr. Michael Keefer and Nica Mintz

Why have I kept silent, silent for too long
over what is openly played out
in war games at the end of which we
the survivors are at best footnotes.

It’s that claim of a right to first strike
against those who under a loudmouth’s thumb
are pushed into organized cheering—
a strike to snuff out the Iranian people
on suspicion that under his influence
an atom bomb’s being built.

But why do I forbid myself
to name that other land in which
for years—although kept secret—
a usable nuclear capability has grown
beyond all control, because
no scrutiny is allowed.

The universal silence around this fact,
under which my own silence lay,
I feel now as a heavy lie,
a strong constraint, which to dismiss
courts forceful punishment:
the verdict of “Antisemitism” is well known.

But now, when my own country,
guilty of primal and unequalled crimes
for which time and again it must be tasked—
once again, in pure commerce,
though with quick lips we declare it
reparations, wants to send
Israel yet another submarine—
one whose speciality is to deliver
warheads capable of ending all life
where the existence of even one
nuclear weapon remains unproven,
but where suspicion serves for proof—
now I say what must be said.

But why was I silent for so long?
Because I thought my origin,
marked with an ineradicable stain,
forbade mention of this fact
as definite truth about Israel, a country
to which I am and will remain attached.

Why is it only now I say,
in old age, with my last drop of ink,
that Israel’s nuclear power endangers
an already fragile world peace?
Because what by tomorrow might be
too late, must be spoken now,
and because we—as Germans, already
burdened enough—could become
enablers of a crime, foreseeable and therefore
not to be eradicated
with any of the usual excuses.

And admittedly: I’m silent no more
because I’ve had it with the West’s hypocrisy —
and one can hope that many others too
may free themselves from silence,
challenge the instigator of known danger
to abstain from violence,
and at the same time demand
a permanent and unrestrained control
of Israel’s atomic power
and Iranian nuclear plants
by an international authority
accepted by both governments.

Only thus can one give help
to Israelis and Palestinians—still more,
all the peoples, neighbour-enemies
living in this region occupied by madness —
and finally, to ourselves as well.

As Grass predicts here, he has been labeled an anti-Semite, the go-to charge Binyamin “Bibi” Netanyahu‘s partisans default to when anyone anywhere attacks his approach to any question involving Muslims.* (Netanyahu is the “loudmouth” mentioned in Grass’s second stanza.) The poet’s membership as a teenager in the Nazi Waffen SS (the “ineradicable stain” he mentions in stanza six) leaves him eternally open to such a charge, although it also makes his publication of this poem oddly courageous. After all, he has put his own hypocrisy behind him, if not the “stain” itself, and this gives special authority to his attack on Germany’s decision to sell a nuclear-armable submarine to Israel.

It so happens that when this controversy arose, I was in the middle of reading another attack on Netanyahu’s fanatical and deceptive career, this one by the Israeli poetry Aharon Shabtai, who mouth simply can’t be sealed by the anti-Semite label. These are from the extraordinary volume of translations, J’Accuse, brought over into subtle and vigorous English by the inimitable Peter Cole:

The sniper who shot at Muhammad the child**
beneath his father’s arm
wasn’t acting alone—
someone else in uniform,
a junior cog in the wheel who was briefed
at a higher level,
positioned him there on the roof,
a public servant,
a cantor
for the Days of Awe;
and someone else
manufactured the ammunition,
and another had it distributed
like bars of chocolate.
The tree doesn’t go green
when a single leaf unfurls,
many wrinkled brows
leaned over the plans.
History has known
foreheads like these—
technicians of slaughter,
bastards in whose eyes
morality is a pain in the ass.
But even cucumbers
need dirt and a little dung.
The worm isn’t born of air;
a million words are required
to reconstruct the manner
in which public discourse itself
is corrupted and turned into refuse—
that which within the body politic
was created to preserve
the heart of justice.

But now
there isn’t time for any of that,
when right in front of the cameras,
without any shame,
grown men in uniforms
are shooting into a helpless crowd.
From the back with their necks and behinds
they look like guys at the airgun range
by the screen at an amusement park,
trying to win their girlfriends
a doll or a box of candy.
Atop a hill,
at the distance dictated
by the the administrators’ handbook,
the prime minister looks on
with his company of advisers.
They gaze down
into the Vale of Tears,
toward the horde which is scrambling
like jackals and rabbits,
grandchildren
and great-grandchildren of refugees
who were stripped of their homes and fields,
wells and towns,
and with an iron hand were driven
into enclaves and ghettos.
Each one of these authorities
sees to his part in the plan:
one’s in charge of liquidation,
another of the daily harassment;
this one’s field is public relations,
that one’s collaboration;
this one deals with expulsion and fencing,
that one with the destruction of homes.
Because, when it comes down to it, we’re only speaking
of a population of a certain size,
which needs to be pounded and ground
then shipped off as human powder.
The outrage itself has to be packaged
like any pice of merchandise,
with all the clichés
of corporate politics:
they’ll give it a name,
then a format can be arranged
for staged negotiations,
with “breakthroughs” and “concessions,”
and moments of press-covered heightened tension,
complete with a pr blitz full of talk:
for this purpose we have the spokesman,
the journalist and author as well,
the TV announcer and the professor,
a long lineup of Men of Letters,
all blowing into the Process’s trumpets—.
For the sniper who fired at the child
is only a single stinking instrument
within an enormous orchestra,
which is conducted by the man who knows
more than anyone else
that long-term solutions can be found
for any and every problem,
when it’s no longer breathing.
The moment that man smiles,
the skin over skulls becomes transparent;
when, hoarsely, he pronounces
the word “Peace”—
mothers wake up trembling;
he knows that words
are only the skins of potatoes
with which the stupid are to be stuffed—
and now, at long last,
he’ll roil up his sleeves
and get down to the work at which he excels,
and bring about a blood bath.

I, too, have declared war:
You’ll need to divert part of the force
deployed to wipe out the Arabs—
to drive them out of their homes
and expropriate their land—
and set it against me.
you’ve got tanks and planes,
and soldiers by the battalion;
you’ve got the rams’ horns in your hands
with which to rouse the masses;
you’ve got men to interrogate and torture;
you’ve got cells for detention.
I have only this heart
worth which I give shelter
to an Arab child.
Aim your weapons at it:
even if you blow it apart
it will always,
always mock you.

It’s worth noting that in another poem Shabtai mocks “Bibi” by presenting an election in which the two choices are “PeePee” and “Caca”.

In the end, it’s time for all of us to embrace the notion that the Israeli government is not beyond criticism, and that to criticize it is not anti-Semitic. If poems such as those by Grass and Shabtai accomplish nothing else, they will have justified their existence.

_______________________________
*  To be fair, Netanyahu and his party have managed to alienate even the substantially secular Turks. And I don’t mean my observation to be taken as support for the likes of Ahmadinejad or fundamentalist forces in Iran or anywhere else—including Israel.
**Regarding “Muhammad the child,” see here.