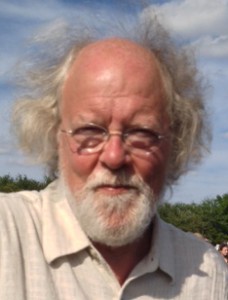 No American poet since William Stafford is as quotable as David Giannini. A tendency toward aphoristic piquancy layers and complicates all of his work. It’s not that he rejects simplicity; it’s simply that the world and the mind that perceives it are not simple, and Giannini is committed to complexity as part of his continual reach toward wholeness.

Giannini’s new collection (his fourth from Dos Madres Press), Mayhap: Selected Brief Poems, is a fine example his commitment. Every poem in it is exemplary in this respect, but I want to pick one that’s among the briefest in the book—one that gave me pause the first time I read it and required some subtle thought before I could see what he’s up to in it. The poem is “Father”:

His wristwatch
still ticking
the casket. 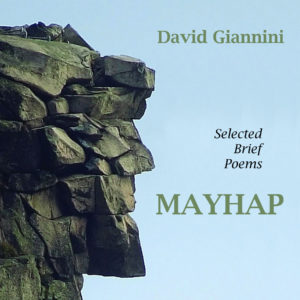 On my first reading, I paused and puzzled over the phrase “ticking / the casket.” If it were me, I thought, I’d have added “in”—“still ticking in / the casket”—because that’s the moment’s fact, isn’t it? Then I thought, “A typo….” But in all of Giannini’s book, I have yet to come across a typo! (He’s clearly a better proofer of his own work than I am of mine.) So why the missing preposition?

The answer, of course, is that the “in” is not missing; it is left out on purpose. My sense is that there are at least four reasons for it.

One reason is the poem’s rhythm. The stresses fall like this:

Second, the pause created by the placement of two unstressed syllables together (“ticking // the”) receives emphasis from the line ending’s intervention. The heightened pause suggests a catch in the throat, a suggestion that adding the word “in” would erase, making the moment feel too lyrical, too smooth. Grief, after all, is a jagged thing.

Third, the poem may be registering three distinct moments, three flashes of perception: Seeing the wristwatch; hearing that the watch is ticking; then seeing the thing that contains it all. A kind of jump-cut effect one might find in a film.

Fourth, there is a meaning to “tick” that has nothing to do with a watch. We “tick” a box on a checklist to show that we’ve accomplished a task. The father’s watch is “ticking” the casket, checking the final task—dying—off the father’s list. If this reading is correct and we take it seriously, we find ourselves in an emotionally and psychologically fraught situation. The watch keeps “ticking / the casket” even though the father’s dying is done. Suddenly the poem touches on the checklist that applies to us all, from humans to ants, from planets to stars. As Alan Dugan puts it at the end of his most harrowing poem, “It’s a lonely situation.”

Okay, we’ve about exhausted this “small” poem—but not quite. Let’s consider a fifth complexity.

There is, it seems to me, yet another complexity at work. The watch, an avatar of time, is “His” (the father’s) watch. It’s as if time itself is a kind of father-energy that kills fathers on its way to killing their children—a most unwelcome inheritance. This suggests that the death of the father is an Oedipal task on the child’s checklist as well.  Maybe this is why the child’s grief—assuming the existence of that grief—is not foregrounded by the poem. In fact, this is not a grief poem at all, but a poem about the primal anxiety between fathers and children, about a threatening father-energy that here is given the form of time. The catch in the throat between lines 2 and 3 is not grief, or not only grief, but a dread that the implacable father-energy inspires in children.

Whether my reading of “Father” has validity or not, I hope it at least highlights two of the most appealing qualities of David Giannini’s verse: first, it woos the reader into a state of contemplation; second, it rewards every ounce of energy the reader devotes to it.