Letting It All In

Browse: Home » Letting It All In

Letting It All In 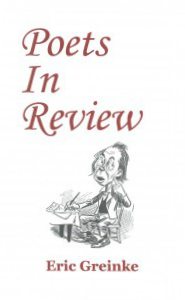 Presa Press has just released a book by one of my longtime favorite small press reviewers, a fellow poet by the name of Eric Greinke. Poets in Review gathers reviews from two decades of this activity, decades separated by 32 years of … well, not reviewing. Greinke doesn’t explain the long hiatus, merely noting in his introduction that his first decade of reviewing reviewing began in 1972, and during that period he was paid $50 per 500-word review by The Grand Rapids Sunday Press. He returned to the craft in 2005, by which time I believe most newspapers had ceased publishing reviews at all, much less reviews of poetry.

It’s remarkable that what we might call Greinke’s “taste principles” have changed little over time. This could be a bad thing, of course, but Greinke was blessed early on with the most important quality in a good book reviewer: curiosity. Combined with his innate humaneness and honesty, Greinke has managed to write down-to-earth, insightful reviews in which one intelligent reader addresses other readers that he assumes to be equally intelligent. In this he strikes me as a somewhat less urbane Randall Jarrell. Robert Lowell called Jarrell “the most readable and generous of critics,” and Karl Shapiro, after reading Jarrell’s not entirely positive review of his work, remarked that “I felt as if I’d been run over but not hurt.” 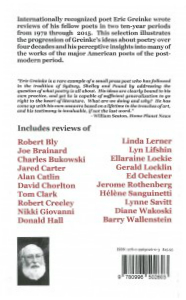 I can attest that Greinke’s reviews have a similar effect because he reviewed my Thread of the Real in the Spring 2015 issue of The Pedestal Magazine, which happens to be the last review collected here. It’s gratifying that someone of Greinke’s readerly skills thinks that I am “capable of transcending ordinary perception to higher truths,” and I wasn’t terribly wounded that he didn’t care for my political poems. I confess to being a bit puzzled by his rejection of political poetry in general, though, as “a dangerous vortex that poets can easily fall into,” a dire result of what Greinke calls “attempting to poeticize their politics.”

We’ve all read bad political poetry, in which adherence to a party line flattens the work, or worse, reveals the poet’s historical blindness. I think, for example, of Pablo Neruda‘s wretched “Ode to Stalin,” which the ersatz conservatives at The Weekly Standard have trotted out more than once to malign him. Neruda’s devotion to the mass murderer is nauseating, of course, and his paeans to the Communist struggle make for dreary poetry. But the difference between Neruda’s worst political poetry and his best is real; at his best, Neruda could write “I Explain a Few Things,” and “The United Fruit Co.,” and “The Dictators” (given here in Robert Bly‘s powerful translation):

An odor has remained among the sugarcane :
a mixture of blood and body, a penetrating
petal that brings nausea.
Between the coconut palms the graves are full
of ruined bones, of speechless death-rattles.
The delicate dictator is talking
with top hats, gold braid, and collars.
The tiny palace gleams like a watch
and the rapid laughs with gloves on
cross the corridors at times
and join the dead voices
and the blue mouths freshly buried.
The weeping cannot be seen, like a plant
whose seeds fall endlessly on the earth,
whose large blind leaves grow even without light.
Hatred has grown scale on scale,
blow on blow, in the ghastly water of the swamp,
with a snout full of ooze and silence.

What I’m trying to get it is that politics, the deeper currents of it, should be as welcome in poetry as the deeper currents of longing, love, fear, depression, anger, and mystical illumination. I can easily accept that my own political poems may be deficient, especially beside those of Akhmatova, Brecht, Ròzewicz, Bly, Levertov, Cardenal, Darwish (both Mahmoud and Najwan), or Pinsky. But political currents shape my life as surely as dreams do. I would let all of it into poetry: whatever is human belongs there, if we have the art to give it a home.

I have to add that I think Eric Greinke would agree with that last statement, which means I’ll be working even harder on my art. I’ll bet that poets of the Randall Jarrell period couldn’t help but imagine that he was looking over their shoulders as they wrote, a sensation that in the end probably improved their poems.