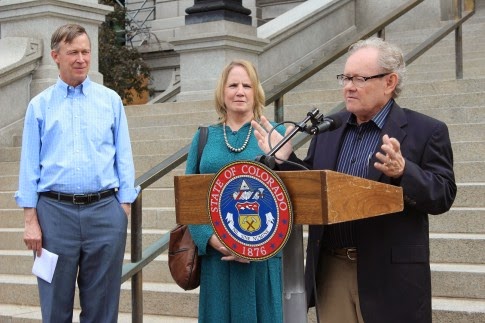 Many of you know that in early September I was chosen by Governor John Hickenlooper to serve for the next four years as Poet Laureate of Colorado. It’s a great honor, of course, even more so because Gov. Hickenlooper was an English major with an early interest in creative writing. I don’t know what ambitions he had for his writing or if he has continued with it “on the side,” as we like to say, meaning any activity one does for love and not for gain; but from an all-to-brief conversation Melody and I had with him before the announcement, it’s clear that he cares about good writing, and since I have no reputation to speak of and therefore no advantage in politics or business, I’m choosing to believe that he was moved by my work. That makes me feel especially good about the appointment.*

What many of you certainly do not know is that when I was informed about the laureate decision, in late July, I had been in a new job for two whole days. My title, a mouthful, is Interim Academic Director of Arts and Culture and Global Affairs, two programs in the University of Denver’s Adult and Professional school, which is called University College. I’d taught writing and literature courses as an adjunct in the Arts and Culture program for a dozen years before this opportunity came along, and I was glad for both financial and vocational reasons. Melody and I have had our own business for over 20 years, a marketing firm called Full Scale, which since the 9/11 attacks had been in a long, slow downward spiral. In a business where loyalty was rare to begin with, we saw it disappear altogether, and as marketing became less about telling a compelling story and more about posts and tweets and frankly stupid YouTube videos begging to go viral (you’d think the terminology itself would give clients pause), our business lost its charm. Unsurprisingly, our bank accounts suffered big losses, too. So when I say that I took a “new job,” I mean that the whole focus of my daily life shifted.

The new job and the laureate gig coming together as they did is a great gift, I mean to say, but a gift—like all gifts, really—that comes with consequences.

One consequence has been that I haven’t been able to post here as often as I used to. I’ve got plenty to blog about—a crooked stack of books with flagged quotes and sticky notes covered with cryptic observations stands next to my chair. Every time I glance at it I feel accused. But I simply haven’t had time or energy enough. 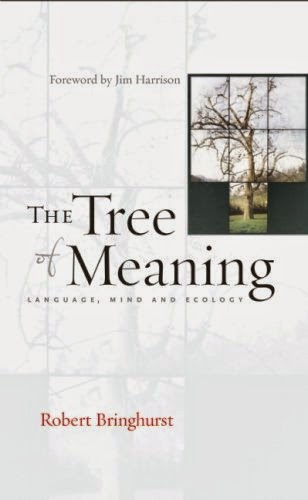 I intend to begin posting again, probably less frequently but more (I hope) consistently in the near future. And toward that end I’m offering an excerpt from one of the most profound, eye-opening books I’ve read in the past several years. It’s by a Canadian poet, scholar of indigenous languages, essayist, and typographer by the name of Robert Bringhurst: The Tree of Meaning: Language, Mind and Ecology. The scope of Bringhurst’s book and the thinking behind it is suggested by Jim Harrison in his introduction: “The Tree of Meaning is a book that before your eyes magically enlarges itself from 336 pages to many volumes. The prose is never reductive but tends to push at the confines of whatever room you are reading in so that the four corners seem much farther away than normal.” I had exactly this experience in 1973 when I first read One Hundred Years of Solitude, and I’ve found myself having it again with The Tree of Meaning. Here are a few examples:

It is no accident that prophets of monotheism, including Plato and Mohammed, have often banished the poets. These prophets understand that the poet is a pagan and polytheism by nature. In a certain sense, even Dante, Milton, San Juan de la Cruz, Teresa of Ávila, Gerard Manley Hopkins, an T. S. Eliot are pagans. Without admitting it, they seem to understand, like the peoples of the Altiplano of Bolivia and Peru, and like many Native Canadians, that it is best to interpret Christianity as one more form of paganism.
But Mohammed and Plato are poets too in their way, monotheistic and tedious at times, but very much livelier and more pluralistic at others.
The great danger is single-mindedness: reducing things to one perspective, ne idea, one overriding rule.
A polytheistic understanding of the world survived in Europe even in the time of the conquistadors, though it was then forced to take a wordless form. Music gave it refuge. It is found in polyphonic music, which is the music of multiple, simultaneous and independent voices. The churches of Europe overflowed with music of this kind in the fifteenth, sixteenth and seventeenth centuries. It did not change the course of history, but it preserved an essential perception of the plurality of being. It preserved the essential, faithful heresy that reality is not of just one mind.

In the beginning, a vocation isn’t much. Just perhaps a nagging interest that blossoms as habitual attention. it matures into continuous, compassionate, active, multivalent curiosity. Curiosity like that has a peculiar side effect. it produces, over time, a sense of intellectual responsibility. And that produces in its turn a nonconforming and non confining sense of identity. In other words, it is whole. A job is always a fragment. Vocation is whole.

I believe that all good writing has an oral root. All writing that is good to read sounds good when read aloud, because its goodness likes in part in its humanity. The humanity of a piece of writing is partly intellectual, of course, but it is also parlay physical, like the humanity of a shoe or a shirt or a shovel. It fits the human body. A good shovel fits the hand and foot, and a good sentence fits the voice, because that is the part of the body we normally use to handle sentences.
The voice has an anatomy, like the arm, the heart, the foot. The voice is mae of breath. A sentence or a paragraph that pays no attention to the reach and rhythm of the voice is uncomfortable or painful, like a shoe that doesn’t fit the human foot or a glove on the wrong hand. But a sentence that does fit the anatomy of voice and breath will touch, through them, some other rhythms of the body: those of the heart and hands and feet, and of the memory and mind.

The cheerful term postcolonial, which I often hear on campuses these days, might suggest that the age of destruction is over. In fact, the colonization is still at fever pitch. The great transformation of gold into lead and of forests into shopping malls continues. Some analogous transformations can be seen in the university itself. One of the reagents used for this purpose is the acid of postmodernism: the thesis that nothing has meaning because everything is language. It works especially well in parallel with the acid of unrestrained commerce: that nothing has meaning because everything is for sale. Repeated exposure to these ideological acids produces human beings who cannot wonder at the world because they are not at all sure the world exists, though they can wonder all the more at social power and reputation. When you take the world away from a human being, something less than a human being is left. That is the inverse of education.

Now, these excerpts are drawn from the first 63 pages of The Tree of Meaning, which I haven’t even come close to finishing yet, but I felt the need to pass them on. And these only brush up against Bringhurst’s deepest concerns, which are for the recognition and admission into our consciousness of the great literary products of indigenous peoples. These products existed only in oral form but have been delivered, through the good graces of linguists and translators, into our hands—though the vast majority await translation and publication. Bringhurst argues that we unnecessarily limit our perception of The Canon by ignoring the genius of native peoples, and he’s certainly right about that. Perhaps before we attempt to teach classes in World Literature we ought to teach classes in the oral traditions of North America, a geographical and cultural construct that Bringhurst defines as all the lands north of the Panama Canal. How different our sense of ourselves might be if we reshaped our sense of the tradition along these lines instead of adhering to the Modernist desire to trace the roots of artistic value back to Europe.

In his famous poem “The Gift Outright,” which Robert Frost read at the inauguration of President John F. Kennedy, the poet states: “The land was ours before we were the land’s.” But his implication that by 1960 we Americans had “found salvation in surrender” to the land was a groundless romantic notion. What Robert Bringhurst calls the continuing “transformation of … forests into shopping malls” proves that we’d better look elsewhere for wisdom if we ever hope to feel less than alien on this continent.

________________________________
* The people at Colorado Humanities and the alarmingly named Colorado Creative Industries have done a fine job of public relations, I have to say, so that anyone interested in my role as Poet Laureate can find all kinds of information online. Here’s a list of links to date: