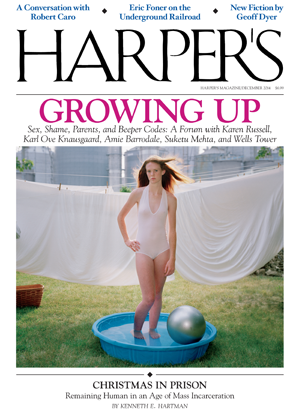 Two excerpts here from “At First Blush,” by Karl Ove Knausgaard, which appears in the December 2014 issue of Harper’s Magazine (translated from the Norwegian by Ingvild Burkey):

Many of my writer friends were bullied in childhood, which is not so remarkable, for being a writer is only possible if you are outside the community; only then are you able to identify it, to know it, and to describe it. It strikes me now that a world without bullying would be like a world composed only of writers and artists. I can hardly imagine a more dreadful dystopia.

[H]ow difficult it is, when your desire to be just like everyone else is as strong as your desire to be unique! I remember that [in adolescence] I cut my hair very short, wore an army jacket, and pierced my ears, and that I ran into my father in the hall shortly afterward, and the he told me I looked like an idiot. I blushed and felt ashamed, for he was right, of course, but at the same time I felt so strongly the pull of another thing, a thing having to do with music, freedom, the future, individuality. this is an important reason why I became a writer, I think, for in everything I write, I am seeking freedom, which to me is a state that is inaccessible to the gaze of others.

I have to say that this Harper’s essay is the only thing I’ve read by Knausgaard. Because I distrust praise, the frenzy of adulation surrounding his series of autobiographical novels called My Struggle (see here, here, here, and here) has held me back. But this essay (the whole of it, not just the writing-related passages I’ve quoted) has convinced me the time has come to dive in. My holiday wish list has just got substantially longer….