Khayyam and Kabir and the Spirit of Opposition

Browse: Home » Khayyam and Kabir and the Spirit of Opposition

Khayyam and Kabir and the Spirit of Opposition 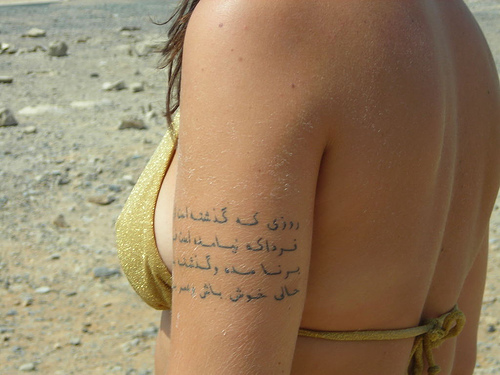 Over at Informed Comment, Juan Cole—a professor of History at the University of Michigan and an astute analyst of the nexus between Middle Eastern and American politics—has been translating poems of the great 11th century Persian poet, mathematician and philosopher Omar Khayyam. (Khayyam is best known in English through his Rubaiyat as rendered by Edward FitzGerald, though from what I’ve seen, the first translation of the poem into English by a Persian translator (Karim Emami), under the title The Wine of Nishapur, is far superior.*) Cole has 52 of Khayyam’s verses under his belt, and many of them are marvelous. Such as:

If the heart knew
the secret of life as it really is,
it would also know, in death,
the divine mysteries.
Since you know nothing
of yourself today,
what will you know tomorrow
when you’re gone from yourself?

This puts me in mind of the 15th century Indian poet Kabir, who wrote:

The idea that the soul will rejoin with the ecstatic
just because the body is rotten—
that is all fantasy.
What is found now is found then.
If you find nothing now,
you will simply end up with an apartment in the City of Death.

It is sometimes said of Khayyam that he was pessimistic about the human condition, but I think instead, as with Kabir, that Khayyam simply couldn’t stomach the hollow triumphalism that lies at the heart of almost every religious tradition. He and Kabir wrote from and against the Islamic tradition (in the way that Sufism sprang from and opposed that tradition), just as Jesus apparently sprang from and opposed the Judaic tradition as expressed by the Pharisees and the Sadducees.

This raises a question: Is it possible, in the current age, for poets to do anything but oppose the traditions from which they spring? Not in their lives, perhaps, but in their works?

“A Book of Verses underneath the Bough,
A Jug of Wine, a Loaf of Bread—and Thou
Beside me singing in the Wilderness—
Oh, Wilderness were Paradise enow!”


In spring if a houri-like sweetheart
Gives me a cup of wine on the edge of a green cornfield,
Though to the vulgar this would be blasphemy,
If I mentioned any other Paradise, I’d be worse than a dog.

It seems to me that Cole’s versions are much more in the spirit Emami brings to his translations….