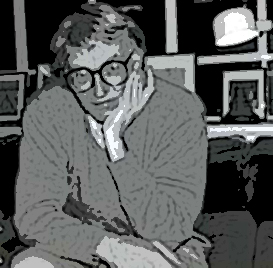 Annie Wyndham at Salamander Cove has launched a remarkable “Featured Poet Series” with a capacious selection of poems and artwork by Bill Knott. I’m not sure how the poems were chosen, but they echo each other in interesting ways, and Knott’s art—which for me seems to spring from a sensibility similar to that of the great Max Ernst (though without his interest in the figurative)—accompanies but doesn’t comment on the poems. Knott is a juggler of words and colors, of sprung rhythms and wound-tight forms.

Annie deserves our thanks for putting his work forward in such a beautiful way. When you swing by the Cove, don’t overlook the fine video treatment of one of Knott’s sonnets by someone named Chelsea, whose childlike voice opens up the poem in unexpected ways.