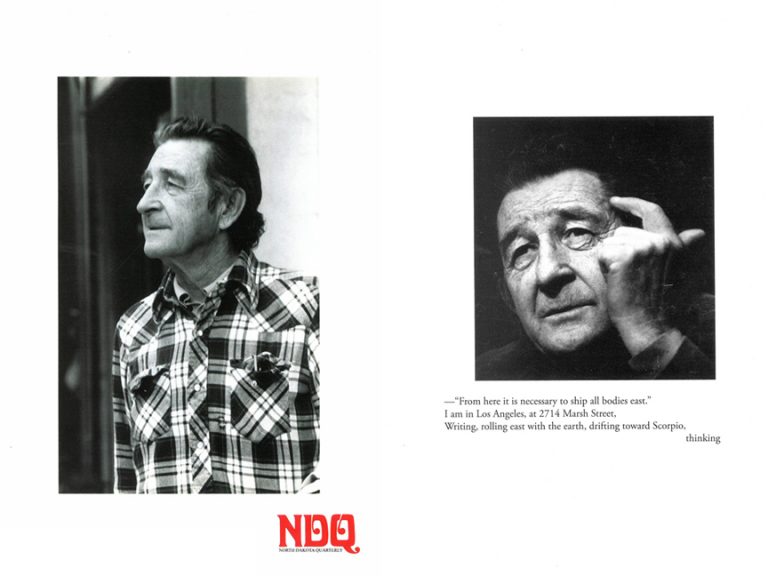 I want to thank Heidi Czerwiec, Poetry Editor of the North Dakota Quarterly, and Managing Editor Kate Sweney for publishing my homage to the sturdy, adventurous, contrarian poet Thomas McGrath, entitled simply “McGrath.” It’s an honor to be included in the company of such excellent poets as Dale Jacobson, Jared Carter, John Bradley, Sharon Doubiago, and so many others, all joining to celebrate the life and work of the man whose epic Letter to an Imaginary Friend is unequaled in American poetry.

McGrath composed his great poem during a period in our history much like this one, when Americans felt under threat and politicians, pundits, and news organizations stepped up to take advantage of that fear. The great fear then was of communism, a fear stoked most famously by Republican Senator Joseph McCarthy, who became the leading figure in a fanatical crusade against the Red Menace. “On February 9, 1950, [McCarthy claimed] he had a list of 205 people in the State Department who were known members of the American Communist Party” [The Cold War Museum]. “Upon subsequently testifying before the Senate Committee on Foreign Relations,” the Encyclopædia Britannica notes, “he proved unable to produce the name of a single ‘card-carrying communist’ in any government department. Nevertheless, the press and the public, drunk on McCarthy’s ginned-up panic, cheered when he became chairman of the Committee on Government Operations of the Senate, in which capacity he widened the scope of his witch-hunt from communists to dissenters. Ominously enough, McCarthy leaned on a cut-throat lawyer named Roy Cohn, who would later become a cut-throat mentor to Donald Trump.

It was in this atmosphere that Thomas McGrath—in 1953, a professor at Los Angeles State College—was summoned before the House Committee on Un-American Activities, which had been hunting communists since 1947 with a focus on Hollywood and institutions of higher learning. The aim was to force McGrath to cough up names, as the director Elia Kazan had the previous year. McGrath was made of stronger stuff, though. Here is the statement he gave to the committee:

After a dead serious consideration of the effects of this committee’s work and of my relation to it, I find that for the following reasons I must refuse to cooperate with this body.

In the first place, as a teacher, my first responsibility is to my students. To cooperate with this committee would be to set for them an example of accommodation to forces which can only have, as their end effect, the destruction of education itself. Such accommodation on my part would ruin my value as a teacher, and I am proud to say that a great majority of my students–and I believe this is true of students generally–do not want me to accommodate myself to this committee. In a certain sense, I have no choice in the matter–the students would not want me back in the classroom if I were to take any course of action other than the one I am pursuing.

Secondly, as a teacher, I have a responsibility to the profession itself. We teachers have no professional oath of the sort that doctors take, but there is a kind of unwritten oath which we follow to teach as honestly, fairly and fully as we can. The effect of the committee is destructive of such an ideal, destructive of academic freedom. As Mr. Justice Douglas has said: “This system of spying and surveillance with its accompanying reports and trials cannot go hand in hand with academic freedom. It produces standardized thought, not the pursuit of truth.” A teacher who will tack and turn with every shift of the political wind cannot be a good teacher. I have never done this myself, nor will I ever. In regard to my teaching I have tried to hold to two guidelines, the first from Chaucer that “gladly will I learn and gladly teach”; the second a paraphrase of the motto of the late General Stilwell: “Illiterati on carborundum.”

Thirdly, as a poet I must refuse to cooperate with the committee on what I can only call esthetic grounds. The view of life which we receive through the great works of art is a privileged one–it is a view of life according to probability or necessity, not subject to the chance and accident of our real world and therefore in a sense truer than the life we see lived all around us. I believe that one of the things required of us is to try to give life an esthetic ground, to give it some of the pattern and beauty of art. I have tried as best I can to do this with my own life, and while I do not claim any very great success, it would be anti-climactic, destructive of the pattern of my life, if I were to cooperate with the committee. Then too, poets have been notorious non-cooperators where committees of this sort are concerned. As a traditionalist, I would prefer to take my stand with Marvell, Blake, Shelley and Garcia Lorca rather than with innovators like Mr. Jackson. I do not wish to bring dishonor upon my tribe.

These, then are reasons for refusing to cooperate, but I am aware that none of them is acceptable to the committee. When I was notified to appear here, my first instinct was simply to refuse to answer committee questions out of personal principle and on the grounds of the rights of man and let it go at that. On further consideration, however, I have come to feel that such a stand would be mere self-indulgence and that it would weaken the fight which other witnesses have made to protect the rights guaranteed under our Constitution. Therefore I further refuse to answer the committee on the grounds of the fourth amendment. I regard this committee as usurpers of illegal powers and my enforced appearance here as in the nature of unreasonable search and seizure.

I further refuse on the grounds of the first amendment, which in guaranteeing free speech also guarantees my right to be silent. Although the first amendment expressly forbids any abridgement of this and other freedoms, the committee is illegally engaged in the establishment of a religion of fear. I cannot cooperate with it in this unconstitutional activity. Lastly, it is my duty to refuse to answer this committee, claiming my rights under the fifth amendment as a whole and in all its parts, and understanding that the fifth amendment was inserted in the Constitution to bulwark the first amendment against the activities of committees such as this one, that no one may be forced to bear witness against himself.

For invoking the Fifth Amendment, McGrath was fired from his teaching job, and in the years that followed, he kept body and soul together by working at odd jobs as a laborer. But he was also working on what would become Letter to an Imaginary Friend—among many other things, the most powerful response to American fascism in our literature.

We will be needing poets like Thomas McGrath in the coming years of ascendant Trumpism. As conservative historian Robert Kagan so neatly put it, “This is how fascism comes to America, not with jackboots and salutes (although there have been salutes, and a whiff of violence) but with a television huckster, a phony billionaire, a textbook egomaniac ‘tapping into’ popular resentments and insecurities, and with an entire national political party—out of ambition or blind party loyalty, or simply out of fear—falling into line behind him.” How to make poetry out of this situation I have no idea as yet. All I know is that we’ll have to do it, and rereading Thomas McGrath is a good place to start.