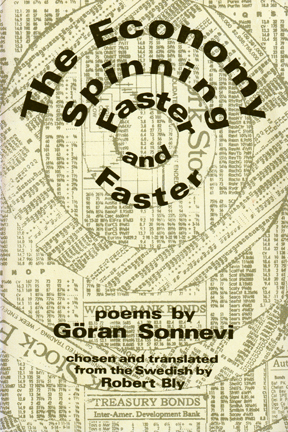 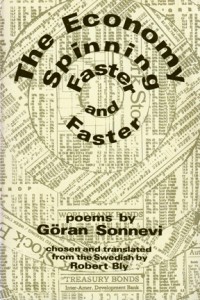 The Economy Spinning Faster and Faster by Göran Sonnevi

I thought I’d done fairly well with keeping up with one of my favorite poets, Robert Bly—both with his own books and his translations—so I was surprised when I read, in the recently published Airmail: The Letters of Robert Bly and Tomas Tranströmer, that Bly had been working on translations of poems by Swedish poet Göran Sonnevi, whose work I became a fan of when I encountered it in 1993, in A Child Is Not a Knife: Selected Poems of Göran Sonnevi, beautifully translated by Rika Lesser. I’d thought Lesser’s versions were the first of Sonnevi’s poems in English, but no: Bly had translated and published Sonnevi over a decade earlier, gathering a selection in The Economy Spinning Faster and Faster, which SUN released in 1982. The book has long been out of print, but I found a copy online shortly after finishing Airmail. 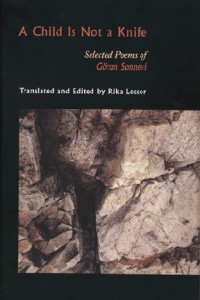 Bly is often accused of translating from the original language into “Blyish.” Tomas Tranströmer, in one of his letters to Bly, actually coined the word as a term of praise, though Bly’s critics use it as a pejorative. If there is such a thing as “Blyish,” it’s nowhere to be found in this book. Bly was translating Sonnevi and Tranströmer at the same time (in Airmail we find him asking Tranströmer for insights into particular words and phrases he struggled with in Sonnevi’s work), and yet his Sonnevi sounds nothing like either Tranströmer or Bly himself. So it may well be that the pejorative use of “Blyish” springs from a general antipathy toward his work rather than a consideration of poems on the page.

The poems in The Economy Spinning are remarkable for their insistence on addressing the interpenetration of the personal and the political. American poetry largely avoids this, of course; the political in poetry is generally denigrated as some sort of degradation of poetry’s “purity,” as if William Blake had never written “The Little Black Boy” or “The Chimney Sweeper,” much less “America a Prophecy.” Like Blake, Sonnevi is not interested in prophecy as a revelation of the future, but as a revelation of the present, and in The Economy Spinning we are faced with the “now” of 1965-1975, a decade in which the American war in Vietnam brutalized so many both physically and psychically around the world. Sonnevi expresses this “Zero”:

There’s more light when I fall asleep than when I wake
That means:
my private death, but
also—the world’s
economy spinning faster and faster
life and death
going around wildly
[…]
I’m shrinking
I’m going around so fast
I look motionless and now
zero!
The dark circle is opening disappears
The private agony is opening
all of here
are vanishing.

This sensibility enriches Sonnevi’s more overtly political poems, too, such as “On the War in Vietnam (1965).” Here are a few lines from the center of the poem—its solar plexus, so to speak:

On TV
last night,
we saw a film clip taken with
the Viet-Cong; we could hear
the muffled fluttering
of helicopter propellers
from the ground, from the side being
shot at. In another film
a few weeks ago
CBS interviewed American
helicopter pilots. One of them
described the release he got
when he finally got a shot at
a “VC”; the rockets
threw the VD about nine feet
straight ahead. There’s no doubt
we’ll have more snow today,
my neighbor says, dressed in black
on the way to work. He embalms
and is nightwatchman
at an insane asylum. The place where I live—Lund
and outskirts—is becoming a whiter
and whiter paper, the sun rises and shines
burning and cold over the vast pages.
The dead are numbers, they lie down, whirl
like crystals in the wind over fields. Up till now
they figure 2 million have died in Vietnam.
Here hardly anyone dies
except for personal reasons. The Swedish
economy doesn’t kill
many, at least
not here at home.

“On the War in Vietnam” sparked bitter debate in Swedish newspapers about poetry’s ability to influence the decisions of politicians. Bly, in his introduction to this collection, writes: “About four in the afternoon on the day of a massive demonstration, this poem fell into the hands of Olaf Palme, who was Prime Minister, and basically allied with the U.S. position. The poem so moved Palme that he joined the demonstration that night; in fact I believe he led it.” Tranströmer disputed this in a letter to Bly published in Airmail, but Bly pushed back in his reply, stating that he believed the story to be true. Whatever the objective truth of it, we can understand why Bly—who had co-founded American Poets Against the Vietnam War and donated his prize money from the 1968 National Book Award to an anti-war activist group—would have wanted to believe it; and we can understand why Tranströmer would have wanted not to believe it, since he was frequently under fire from Sweden’s left-leaning literary establishment for refusing to write overtly political poetry. In fact, as I read Sonnevi’s poem, I had to wonder if the neighbor he mentions, the “nightwatchman / at an insane asylum,” may be a stand-in for Tranströmer, whose work is full of snow and who, in 1965, was working as a psychologist at a youth correctional facility. This may well be a case of “reading into,” though, since Tranströmer’s job was in Roxtuna, about 260 miles north of Sonnevi’s home in Lund. Certainly he wasn’t a neighbor in the spatial sense of the word! 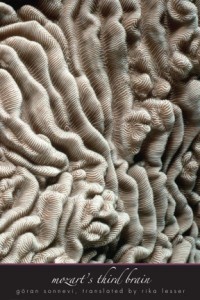 In any case, Sonnevi is well worth reading, and not just for his insights into the historical period shadowed forth in The Economy Spinning Faster and Faster. It’s pretty clear that his work in this book still speaks to our situation, which has only worsened. But he has other poems that build powerfully on this earlier work, which readers can find in A Child Is Not a Knife and another volume of Lesser’s excellent translations, Mozart’s Third Brain.

View all my Goodreads reviews