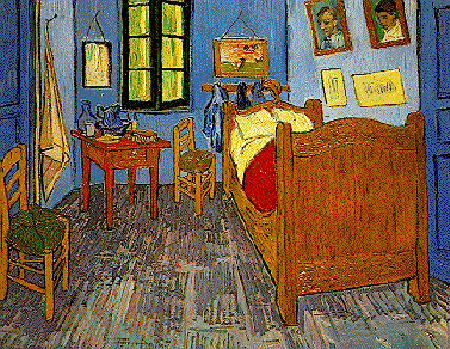 I never thought I’d hear a better song about Van Gogh than Don McLean’s “Vincent,” then along comes Joe Henry with “Room at Arles,” on his new album Reverie:

I still love McLean’s song, of course—elegiac, lyrical … but maybe a touch too pretty, And yet…

According to the Catholic Encyclopedia, Van Gogh’s namesake St. Vincent was martyred under Diocletian in 304 CE. “His body was thrown to be devoured by vultures,” the story goes, “but it was defended by a raven.” So maybe the crows in one of his last pictures are trying to help.

There is also the new theory that Van Gogh was shot, perhaps accidentally, by one of two teenage boys who had been tormenting him—bullying, in current parlance. I like this notion because it explains Van Gogh’s statements about his so-called suicide: “When asked by police if he had tried to kill himself, Van Gogh answered, ‘I believe so.’ Vincent followed that strange remark with the stranger words, ‘Don’t accuse anyone else.’” (Full article here .) This version appeals to me because it demonstrates that genius and humane generosity aren’t mutually exclusive.