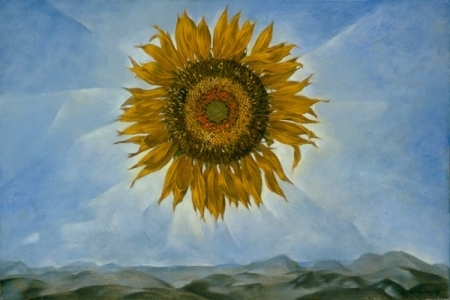 No new poems this week, which got away from me in every sense. So … here’s an unpublished chestnut from May 1978:

faintly
over the fields in winter

Something Chaplinesque about it that I still enjoy.

Also, in wandering among the many links out there for Dorothea Tanning (the painter, sculptor and poet who passed away on January 31 at the age of 101), I ran across a painting of hers that I choose to believe sprang from her reading of Montale‘s sunflower poem, which I attempted to translate here sometime back. The painting is entitled “Rapture”:

It’s interesting to note that “Rapture” was painted in 1944, two years before Tanning became the fourth wife of Max Ernst. There is a wonderful Lee Miller photo of the couple (in Sedona, Arizona) here.