I don’t know what it is about that portion of Europe that in the 16th and 17th centuries was part of the Ottoman Empire, but the poets who spring from that soil often write in the manner of folktales. (Think of Vasko Popa and his famous pebble.) It’s a mode that largely vanished with the Renaissance in the rest of Europe, which embraced the Enlightenment and its Realism with fierce devotion and consigned the Fantastic to children’s literature. 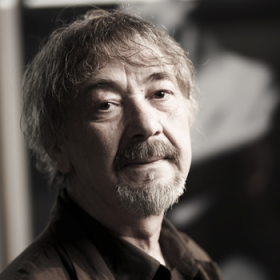 I got to thinking about this while reading an extraordinary book by a Bosnian immigrant to Canada named Goran Simić. The book is Sunrise in the Eyes of the Snowman, and I highly recommend it. Simić is one of those exalted sufferers in the line of Dostoevsky and Kafka; but where Dostoevsky spends his energies on Realism and Kafka spends his on despiritualized Symbolism, Simić ranges between those poles with a saddened yet somehow uplifting energy. Remarkably enough, Simić’s poems in Sunrise were written in English—this after two significant collections translated from … well, I’m not sure. Bosnian? Serbo-Croatian? (The books don’t say.) Those books, From Sarajevo with Sorrow and Immigrant Blues are powerful, too. But there’s something above and beyond going on in Sunrise, especially when that ancient folktale mode appears. The mode surfaces only now and then in most of the poems, like a dash of paprika enriching a stew, but here’s an example of an entire poem in that mode:

THIS MORNING I SAW GOD

This morning I saw God
enter a concentration camp
with a raven on his shoulder.
Beneath his arm he carried
a Bible wrapped in the pages
of the morning paper.
He was fixing his hair
in the reflection of his own palm
and laughing the way optometrists laugh
in front of canvases.
He was chewing on his lacquered nails
and yelling at the soldiers
who forgot to take down
the frozen memorial plate
from the walls of the crematorium.

I almost didn’t recognize him.
Escorted by a necrophilic angel,
with a gas mask for a pet,
he walked along a thorny fence
stroking his steel moustache.
To happy devils he offered bottles
of perfume in exchange
for common workboots.

Along the way, he made the sign
of the cross over the roofs of houses
which subsequently collapsed.
He smiled shamelessly,
handing out scented soaps
to prostitutes, and pointing the way
to dry bathhouses.
They deterred him by showing him their palms
with never-ending lifelines.
It was sad to see him that way: like a laid-off postman who still wears
his uniform with pride.

Even worse,
he looked like me who was looking at him,
holding a pen, trying to figure out
why these lines I write
resemble even less what I want to say.