Discoveries in Writing the Script for “War of Words”

Browse: Home » Discoveries in Writing the Script for “War of Words”

Discoveries in Writing the Script for “War of Words”

Ticket sales have begun for “War of Words,” based on a script I wrote/assembled by four Arvada Center for the Arts and Humanities actors, under the guiding hand of director Lynne Collins. The preceding slash mark means that much of the script consists of poems by North Americans, written in response to WWI, with an original narration linking and, I hope, illuminating the work of these poets.

I started researching poetry of the period over a year ago, with the aim of presenting poetic reactions to the U.S. entry into that war from this side of the Atlantic. In the process, I was surprised to discover how much of the very best poetry was by American women. Their responses to the war were varied, subtle, and powerful—certainly as strong as the work of their male counterparts.

The disturbing part of this scenario is how many of these women have vanished from the anthologies. In some cases this has been a slow erasure, reflecting changes in taste; in others, the erasure was self-inflicted: poets do stop writing, after all, when the creative impulse abates. But some became ghosts when they withdrew from one of the approved literary scenes, which, between the turn of the century and World War Two, were New York and Chicago.

“No future historian of the United States will be able to use quotations from her twentieth-century poets in support of an imperial policy of conquest and slaughter.”
—Alice Corbin Henderson, in Poetry: A Magazine of Verse, Volume V, October-March, 1914-15)

I think, in particular, of Alice Corbin Henderson, who became Assistant Editor of Poetry magazine in 1912 soon after the publication of her second collection of poems, The Spinning Woman of the Sky. Having been diagnosed with tuberculosis, she moved from Chicago to Santa Fe in 1916 with her husband, artist William Penhallow Henderson, and continued her editorial work from there until 1922.

In Santa Fe, Henderson and her husband quickly became strong advocates for Native American civil rights, and in the late 1930s were instrumental in establishing the House of Navajo Religion, a museum of Indian culture and spirituality. She also edited a seminal anthology of New Mexico poetry, The Turquoise Trail, published in 1928.

Although Henderson is represented in “War of Words” by only one poem, I hope it helps to send poetry lovers to her work, which deserves to be returned to American anthologies.

NOTE: After the “War of Words” performance on March 14, there will be a discussion during which I’ll answer questions about the performance, the history behind it, and the role of poets and poetry in wrestling with historic events. It ought to be an interesting evening! 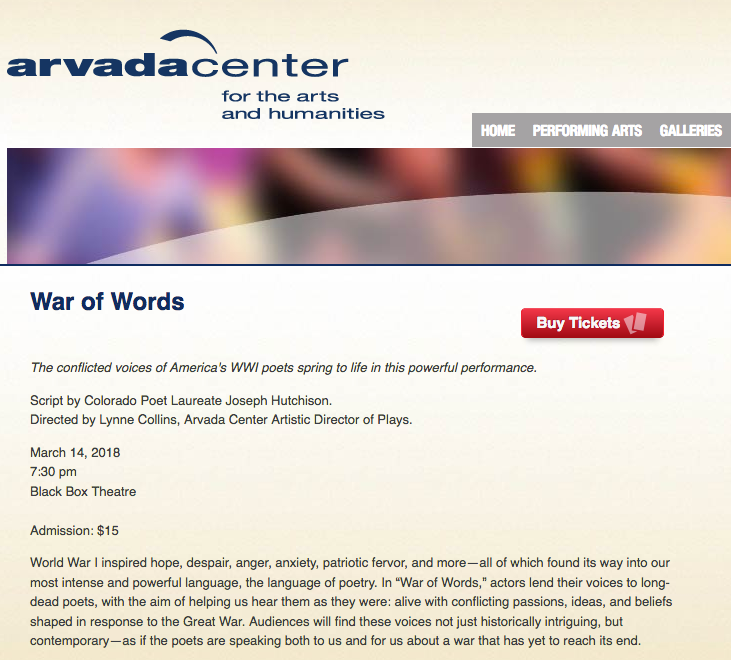