Dilatory (With Apologies to Bob Arnold)

Dilatory (With Apologies to Bob Arnold) 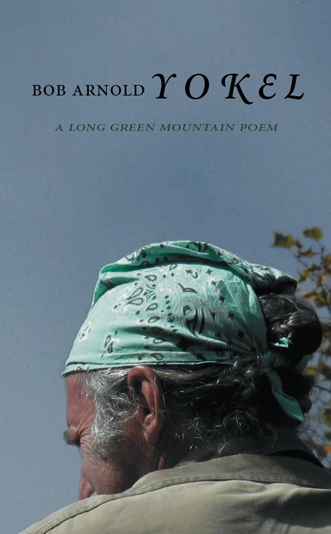 This post’s title is a word I’ve always wanted to use but not in relation to myself. Oh well.

Last year I picked up an extraordinary book, Bob Arnold’s “long Green Mountain poem” Yokel, read it through at one long sitting (unintentionally—my To Do list went unchanged that day), and then hopscotched through it with increasing delight over the next couple of weeks. I meant to write about it, but my To Do list finally took over my life.

So why bring all this up now? Well, while I was being dilatory about Yokel, Bob Arnold was preparing another collection, I’m in Love with You Who Is in Love with Me, which arrived a few weeks ago. There went my To Do list again.

The many pleasures Bob Arnold’s work offers are missing from most poetry today, it seems to be. He has no interest in theories about theories, never mistakes indirection for profundity, and favors clarity over ambiguity. (I have no problem with ambiguity, of course, though prefer it when writers address it clearly.) In both of these collections, Arnold celebrates the inner life as a reflection of the outer life and vice versa. It’s the interpenetration of the two that shapes his language. His low-key voice moves between feeling and observation so easily that the division between self and world, which is such a stubborn characteristic of Western mentality, softens and at times seems to vanish altogether. At least in part this is due, I think, to the fact that Bob Arnold is a laborer: a woodcutter, carpenter, stone mason, roofer, and for all I know a master plumber and electrician too. His poems honor the physicality of that existence and demonstrate that it only looks strictly physical from the outside. From the inside, the movements of the hand are no different from the movements of the spirit. And so it is in Arnold’s verse.

Let me take Yokel: A Long Green Mountain Poem first. (Note how the absence of a comma after “long” lets each of the subtitle’s adjectives inhabit two or three grammatical relationships at the same time. This is what I mean by addressing ambiguity clearly.) The book is divided into seven sections, each with its own wry title: “Yokel,” “Bride of Yokel,” “Son of Yokel,” “Woodcutter Yokel,” “Bastard Yokel,” “Pastures of Yokel,” and “Go-Along Yokel.” It would be too simple to say that Arnold is the “yokel” here, because this book includes lots of poems about other yokels. In fact, “yokel” becomes almost a presiding spirit that expresses itself through the poet and through the poet’s subjects—a sort of Green Mountain wakan tanka (the Lakota term for Great Spirit or Sacred Mystery). From the outside (from a tourist’s car just passing through, for example), these people might match the dictionary definition of “yokel”: “an unsophisticated person from the countryside.” But Arnold knows better and shows us what he knows in poems about local geniuses (“genius” in the ancient sense) named after their emblematic qualities: Native, Cityboy, Logger, Redneck, Sweetheart, Curious-lady, Preacher; though a few other folks with particular names appear as well: Teddy, Ralph Burdock, Clayton, Everett. The result is a community unlike any you’ll find in American poetry at this time in its history.

Here are a few examples:

Was quite a guy—
A ladies man with four sons.
A college professor who took one
Of his students for his second wife.
A twinkle to his eyes helped swing things
Since he only had one arm, lost as a boy,
But he insisted on manning a chain saw
Where he could, drive stick-shift like a demon,
Play the piano. Now that he has been dead
Ten years I wonder if he ever told me the truth,
Since he was too good to be true. A man whose
House site I cleared and then there were twenty piles
Of brush he wanted burned. I still have my denim
Winter coat that caught on fire by a hot spark.
The book he wrote on Thoreau.
The books I wrote because of Thoreau.
And somewhere in my hands that last time I was
Called over to help him out of his bed, body
Burned away from cancer, and bracing him up
In the bathroom so he could take a leak
We both got a look at one another in that
Awful private mirror.

When proudly announced at town meeting
Cable television was coming to the area
In the front row one old native raised an arm
Asking, Does this mean I have to get a TV?

Something happens to them—
They get sullen, country kids.
Not city kids who become country,
But true hicks, who smell of cowshit,
Skin like corn snow in March. We once
Knew a ten year old girl who would visit
Us, braids of sunny hair, who at eighteen was
Hair cropped and sallow. No matter how
Hard I looked I couldn’t find that
Ten year old we would meet on the back road
As she hiked home from school, jumping
Puddles, smiling into our eyes, never
A schoolbook in her arms. Most others quit
School by sixteen, get married and wreck cars
Through their teenage years and can
Rebuild an engine blindfolded, but are
Looked upon as stupid. Slow.
Who torch a vacant barn for kicks
Then join the Army, who look at tan
Whispery weekend girls like a bull at a
Fence, who get married and love their
Kids but piss on their wives; names like
Moose, Bub, Wally, they stomp around.
Mothers that raised them live next door.

I’ve avoided quoting from the “Bride of Yokel” section, which contains some fine, luminous love poems, because that section comes to full fruition in Arnold’s later book, I’m in Love with You Who Is in Love with Me. Love poems are somewhat out of fashion in American poetry at the moment. Poets in the throes of spiritual angst, or the throes of theories about theories, or the throes of whatever soulless enervation is required to commit “conceptual writing,” aren’t interested in love poems because they aren’t interested in love. Love won’t get you tenure, as (I believe) Shakespeare say.

Anyway, Bob Arnold is different. He is in love and has been in love for a slew of years now, and this makes him susceptible to what I think of as “coherences”—those moments when the beloved’s presence flashes into otherwise ordinary moments of existence. (I should add here that there are at least two “beloveds” in these poems: one is Arnold’s wife Susan, the other his son Carson; certain others are identified in dedications attached to specific poems.) Religious sensibilities register these moments as sudden revelations of deity. Lovers simply have a different way of registering the phenomenon. I’m in Love… tells fewer stories than Yokel does, but instead offers up about a hundred (I haven’t really counted them) lyrical instances of this salutary pleasure, which makes for a reading experience that is uplifting and full of healing delight.

Here are a few examples:

How often have we
Stepped together into water—
You left your clothes on the rocks
And shivered your way to me
Said it was freezing as I thought
Of the mountain stream filling this
Clear basin of evening light, and how
Swallows showed us the angles of the sky
Far above barbed wire and pasture heat
Which we came down from after work
Smelling lilac in the breeze—
And it was the long blonde hair you shook
Out of a blue bandana and later braided
That had me remember the day and night

Just the way your loose
Hair sweeps your cheek
Loosens me

Heroes, fantasies, icons, dreamboats, filigree
All disappear, never-were, something about a big imagination

While those you do love and they do love you
They also disappear, here today gone tomorrow, poof

So now you know what to do

I should end with something profound or exhortatory or both. But Bob Arnold has already done it, I think. It’s all there in his poetry—and a good deal more. I suggest that you do yourself a favor and buy these books at your earliest opportunity.