Digging into The Gravedigger’s Roots

Digging into The Gravedigger’s Roots 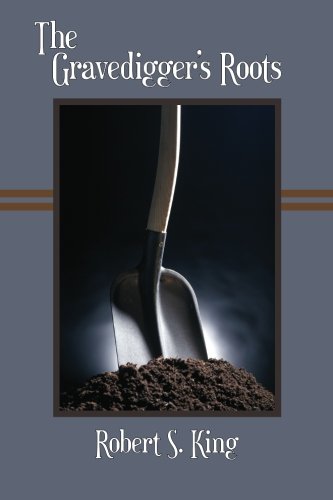 I’ve read only three ebooks in my life, though there are number in my iPad’s Kindle queue. One was Richard Paul Roe’s wonderful The Shakespeare Guide to Italy: Retracing the Bard’s Unknown Travels; a second was Haiku 1.0 by Joaquín Iborra Mateo, a bilingual edition whose English versions don’t quite rise to the level of the originals; and most recently, Robert S. King‘s The Gravedigger’s Roots, which I want to say a few words about here. As I did with Roe’s Shakespeare book, I’ll be buying the hard copy of The Gravedigger’s Roots because, try as I might, I am incapable of truly enjoying an onscreen book. 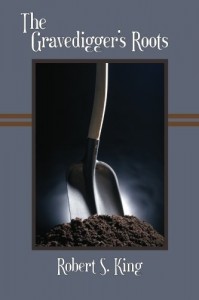 King’s collection takes what has become (so it seems to me) a popular form for poets since John Berryman‘s The Dream Songs. Berryman gave us Henry, an anguished character with a wicked sense of humor who is always tugging at the black thread that holds his soul and body together. King gives us The Gravedigger, a character occupied with the implications of his occupation. He contemplates the dead and the living, beginnings and ends, time and eternity, and the dirty reality of the work it takes to plant the remains of each individual adventure in consciousness back into the earth from which it arose. Unlike Henry, our Gravedigger doesn’t suffer from manic bitterness, and his humor is much gentler, his wit not caustic but vulnerable and sweet. It’s this sense of humor that keeps King’s sequence from sinking into the wistfully Romantic melancholy we find, for example, in Edgar Lee Masters‘ Spoon River Anthology, though The Gravedigger never turns away from the darker implications of mortality.

Not to rising sky they anchor,
and what is the value of dirt?
It has no wings unless I fling it.

My shovel is the heavy wing
flying too close to the earth.
Hawks hear it at the end of the their dives,
the choking sound it makes
as it pierces the ground.

I am told, I tell myself …
Oh, I must fill my ears with one sound:
thin roots popping as the blade moves through.

We would be disappointed, of course, if the gothic promise of King’s concept didn’t surface amidst the more philosophical musings:

The snow comes
and adds two feet to my digging.
I remember once, as I was
turning white and burrowing,
how I fell through a rotten box,
crashed into the open arms of bone.

The skeleton held my head to its chest
as if I were her child
crying home from a fight.
I had to break her arms to breathe,
rose above her, brushed
her cold white skin from my coat.

Still, a ghost shivers within me,
a memory watching
the snow fatten her again.

There are surreal elements at work in King’s poems as well, often in brief dramas that take place in a charged but ambiguous dream-space, as in “Communion”:

Head bend over, a uyoung man by candle light
ate from a plate full of ashes.
He smiled at me, an old man.
“You are going to say phoenix, aren’t you?”
Teeth stealing light from the candle,
he lifted a warm, gray spoon:
“You see, old man, this is my father.”

“Won’t you join me,” he said,
reaching to shake my hand.

I won’t quote more in the hope that you’ll buy the book to read the rest. But I can flaunt the titles of a few King poems, which in themselves capture a good deal of his black-comic stance: “Why the Dead Are so Passive,” “The Gravedigger at the Costume Party,” “Orphans Adopting Themselves,” “The Gravedigger’s Pay Dirt”. Like all of King’s work, the poems that go with these titles live up to them in surprising and insightful ways.