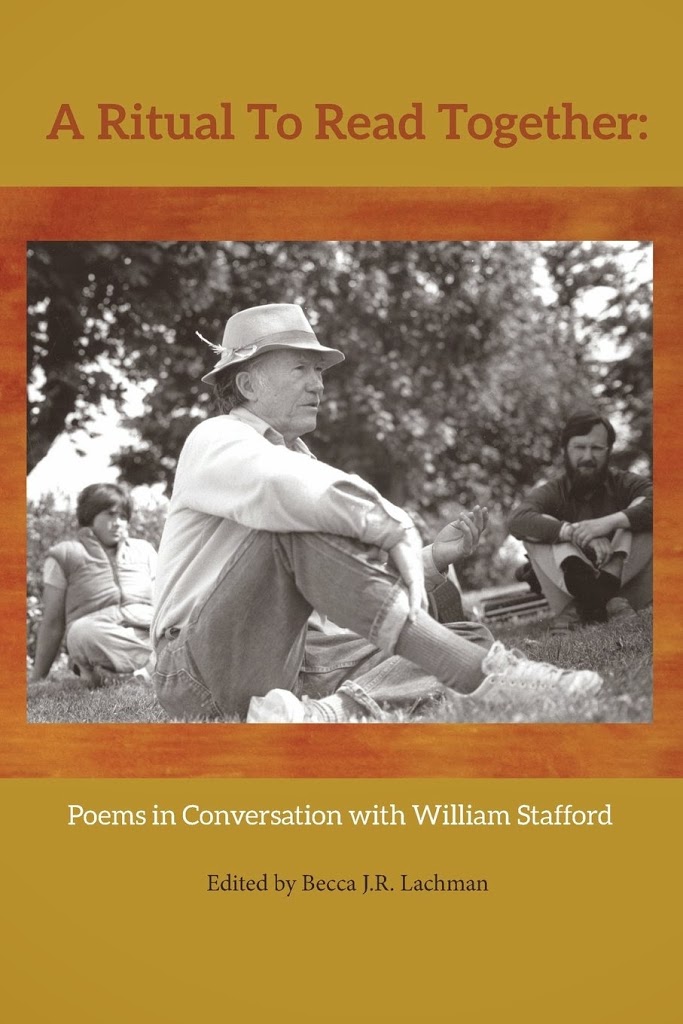 A couple of days ago, heading out on the 400-mile trip from Indian Hills to Durango to meet our 4-week-old grandson for the first time, we stopped on our way out of town at the post office. Amid a stack of junk mail and bills was a padded envelope with a copy of the recently released anthology, A Ritual to Read Together: Poems in Conversation with William Stafford. The editor, Becca J. R. Lachman, had kindly accepted a poem of mine for the collection—an early poem from my second full-length book, House of Mirrors, which I’d long wanted to revise. (Stafford had called one of his essay collections You Must Revise Your Life, so I knew my changes would be very much in the spirit of his own practice.) How the revision came out is up to others to judge, of course, and all I can do is hope that the poem continues to honor the impact Stafford had on my life as a poet and a human being.

It’s clear from the 100+ poets whose work appears in A Ritual that Stafford deeply affected many lives. The poems speak of his kindness, his toughness, his humor, his commitment to pacifism; they all register, in one way or another, what I think of as “the shock of integrity.” The most disappointing thing about getting older is realizing that the IQ (Integrity Quotient) of America is continuing to decline, and that the proliferation of poets hasn’t made much of a difference in the trend; in fact, there seems to be a general consensus that poetry is suffering from low IQ as well. This is why this anthology is more important than a standard Festschrift. It puts us in touch with the deepest IQ-boosting energies that Stafford’s poetry and the example of his life have released in multiple generations of poets.

And not just poets, of course. Stafford’s work has—as his presence had—an often magical effect on people who weren’t writers. Here’s an example.

The best poetry reading I ever attended was in a thoroughly unyuppified bar on Denver’s West Colfax back in the early ’80s. A fellow named Peter something had founded what he called The Dragon Smoke Committee (after Robert Bly’s seminal essay), and under those auspices he brought William Stafford to town. There was a backlit bar whose mirror reflected two pool tables. On the back wall, an oversize doorway led to a second room with a small stage where local musicians were typically hosted. Stafford read in that back room, but the music of the jukebox, the crack of pool balls, and the general hubbub flowed right in. I had seen Stafford perform several times, and in the bar venue he followed his usual practice, reading as if he were talking to you one-on-one over a cup of coffee at a quiet corner table. Hubbub didn’t bother him. About halfway through the reading those of us in the audience realized that the jukebox wasn’t playing anymore. I remember looking back and seeing the guys who had been playing pool and about half the other customers of the bar standing respectfully along the back wall. When Stafford finished, they joined the rest of us in applauding enthusiastically.

I imagine this was probably the first poetry reading the drop-ins had ever seen. Who knows whether any of them ever went to another? But the potential was there. And if there’s one unifying ground-note in Stafford’s work, it’s the notion of potential. “Maybe I’m a king,” he writes. Not the kind of king with a scepter and body guards and a limo at the gate, of course, but a person endowed with the power of choice.

Back to the anthology. For me there’s also the selfish pleasure of finding my work among the works of other admirable poets. Here’s a partial list of contributors to A Ritual to Read Together:

This list comprises less than one-fifth of the poets Ms. Lachman has assembled to honor William Stafford’s memory and the continuing influence of his work. Wonderful!