2019 was a challenging year—deaths, health scares, creative dysfunction—but as ever, reading sustained me. I finally read Juan Rulfo‘s classic Pedro Páramo—one of those books that makes me wonder why I waited so long. It’s a visceral, phantasmagorical novel with all the psychic force of Greek tragedy. I knew that it is widely considered the first fully-realized instance of magical realism, and I can see how unlikely it would be for us to have One Hundred Years of Solitude without Rulfo’s influence.

Then there was Ted Hughes‘s Selected Translations (see Ann Skea’s review here), offering a taste of texts ancient and modern, from Ovid, Aeschylus, and The Tibetan Book of the Dead to the great Yehuda Amichai, Paul Éluard, and Vasko Popa. 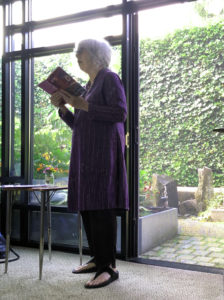 There was also a poet completely new to me: Oregon’s Poet Laureate emerita Paulann Petersen. I was lucky enough to read with both Paulann and another extraordinary poet, Andrea Hollander, at a poetry salon organized by Ce Rosenow, a distant cousin of mine and until recently the publisher of Mountains and Rivers Press books. (Ce also co-edited, with Bob Arnold, the beautiful selected poems of Cid Corman called The Next One Thousand Years.) I have to say I have been completely bowled over by Paulann’s work, which ranges from syncopated, imagistically etched poems full of canny wordplay and closely observed details to more expansive narratives drawing on family and personal history. What a privilege to discover her both in person and on the page!

One last recommendation—part cautionary, part celebratory. I finished out the year with Daisy Dunn‘s Catullus’ Bedspread: The Life of Rome’s Most Erotic Poet, although I had to skip her translations of the great bad boy of Roman lyric poetry in favor of roving back and forth between her book and Peter Green‘s delicious translations in The Poems of Catullus. Green has the audacity and skills necessary to match, or come quite close to, the various meters Catullus used in his work; Dunn’s versions arrive in a kind of listless free-verse English that might make any reader wonder why we still bother to read Catullus. Dunn also has a tendency to pad the story with “Catullus must have known…” and “Caesar surely felt…” and other kinds of speculation. All that aside, her book does a good job of fleshing out the social, political, poetical, and familial milieus in which Catullus lived out his 30 years on Earth.

Well, that’s enough. Here is the full list of my reading adventures last year. Only a few aren’t shown and only because they were so dreadful that—intrepid though I am—I simply had to lay them aside.