This notice came across my digital desk over the weekend, and I’m still feeling an especially sharp sense of loss. (Others have been feeling this, too. See here, here, and here.) Philip Levine was a skilled, humane, compelling poet. I met him only once, when he read in Denver in the 1980s. If I were a diarist I’d know the date, but instead I have to rely on the powerful memory of him reading from his first Selected Poems (1984) and Sweet Will (1985). Levine was a no-nonsense performer of his own work. Why let acting get in the way of the words or dress them up in any colors but their own?

Levine was fierce in his defense of poetry but modest as a human being. A mensch. I know this because many years ago, when I was co-editing, with my fellow poet Gary Schroeder, an anthology of poems about work, I wrote to Levine directly about using two of his poems. He wrote back: “My publisher would kill me if I gave these away for free instead of sending you to them. So shoot me a check for two bucks.” One dollar each! More than a bargain: a gesture of love for the art over the ego.

I said he was fierce in defense of poetry, which meant that he sometimes turned that ferocity on poets and their hangers on. In a powerful 1988 Paris Review interview, Levine was asked, “Where to you think contemporary American poetry has gone wrong,” and he replied:

Back in the late sixties we were an amazingly lively, diversified, and yet united bunch, and almost all of us were committed to standing up and being counted against the war, and many of us were concerned with new ways of living, new possibilities. […] I don’t think all of the poetry was successful, but these poets were trying int heir work to be whole men and women, to combine the “holiness of the heart’s affections” with their sense of moral indignation, to stand for what was best in the American soul and against what was the most corrupting and disgusting. […] I think American poetry was right at the center of the American heart. But we did not change that heart. We did not stop the war. The war ended when the military wanted it to and Vietnam and her neighbors were plundered and leveled. […] I think it killed something in us, the way something died in Wordsworth and many of his contemporaries when the French Revolution went first violent and later bourgeois. Everything we spoke out in behalf of got watered down and marketed and then forgotten. Maybe I’m nuts or maybe I’m just tired,. but that’s partly what I feel. Maybe it’s also the proliferation of writing workshops; maybe academia has managed to rent and spay us. Maybe the various endowments have institutionalized and neutralized us, when in fact we should have kept our outcast state, our poverty if need be, our discomfort, our rage.

A while later, Levine mentions many excellent poets whose work was being largely overlooked at the time. “But the true poetry audience will find their work and love it. […] It’s all word of mouth. […] Is Marjorie Perloff, the literary critic, going to tell us? Hell no. The other day I read a piece of hers that was so stupid it took your breath away. She was lecturing Adrienne Rich on how to become an effective feminist poet, as though Adrienne had failed. Perloff told her she couldn’t do it in her present voice because that voice had been influenced by the poetry of men, so she advised her to become a Language poet and write incomprehensibly and thus revolutionize women’s attitudes toward themselves. Such impertinence.”

(Full disclosure: Longtime readers of The Perpetual Bird know that my hate affair with Perloff goes way back.)

Both of Levine’s core insights here speak to the current state of poetry, it seems to me. I mean the fact that one must look far and wide to find poems that deal with life as we live it as opposed to life imagined as a scattershot desconstruction written to prove membership of some Grad-school Wits club; secondly, one need not look far into the glittery postmodernist snow globe to find astonishing tableaux of stupidity, with a centerpiece consisting of a plastic Perloff & Co. done up as carolers crooning a randomized tune achieved by erasing 80 percent of the notes from some classic composition. Their carol, mercifully, reaches us as silence. 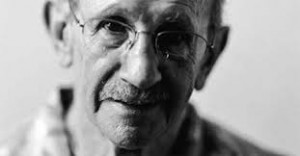 Because of Philip Levine’s devotion to poetry, he wrote it consistently over half a century. It was a practice, not a manufacture of chiseled little monuments, and in that practice he moved easily (or he made it seem so) from the inner life to the outer life, from personal history to national and world history. Other poets with this kind of scope would be called “ambitious,” but Levine made it all seem merely a part of one intelligent person’s way of being in the world. Let me offer, as evidence, a few of his lesser known poems, three from the early ’70s, one from the first decade of our current millennium. 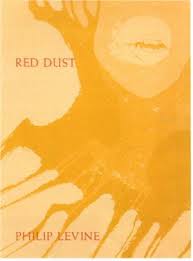 Iron growing in the dark,
it dreams all night long
and will not work. A flower
that hates God, a child
tearing at itself, this one
closes on nothing.

Friday, late,
Detroit Transmission. If I live
forever, the first clouded light
of dawn will flood me
in the cold streams
north of Pontiac.

It opens and is no longer.
Bud of anger, kinked
tendril of my life, here
in the forged morning
fill with anything—water,
light, blood—but fill. 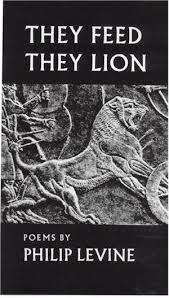 A winter Tuesday, the city pouring fire,
Ford Rouge sulfurs the sun, Cadillac, Lincoln,
Chevy gray. The fat stacks
Of breweries hold their tongues. Rags,
Papers, hands, the stems of birches
dirtied with words.
Near the freeway
You stop and wonder what came off,
Recall the snowstorm where you lost it all,
The wolverine, the northern bear, the wolf
caught out, ice and steel raining
from the foundries in a shower
of human breath. On sleds in the false sun
the new material rests. One brown child
stares and stares into your frozen eyes
until the lights change and you go
forward to work. The charred faces, the eyes
boarded up, the rubble of innards, the cry
of wet smoke hanging in your throat,
the twisted river stopped at the color of iron.
We burn this city every day.

[from They Feed, They Lion]

Two sons are gone.
The end of winter, and the almond blooms
near the back fence. The plum, slower,
unfolds under a streaked sky. The words become,
like prayer, a kind of nonsense
which becomes the thought of our lives.

In middle age we came
to the nine years war, the stars raged
in our horoscopes and the land
turned inwards biting for its heart.

Now in February the pussy willow
furs in the chill wind. In March
the sudden peach, cherry, lilac, in summer
the drumming gourd, corn grape, and later still
the ghostly milkweed and the last laugh. 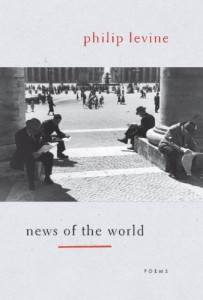 On bad springs bouncing and swayhing down
the coast road south of the city to a spit
of land overlooking the sea, they trucked
the merchant princes and their courtiers
in their gunmetal suits and soured white shirts.
Portly, substantial men, manufacturers
of camshafts, holiday bunting, antacids,
dispensers of bifocals and mornings
of benzene mists, architects of newspapers and
cardboard communes stuttering up the slopes
of Montjuich. Prodded, they limped, shoeless,
over the rocky ground to where the land
stopped at last and the waves broke far below,
deafening the air, and waited, some hopeful,
smoking, some silent, some whispering, a few
kneeling alone, praying, while the militiamen
squatted facing them, their heads falling
in and out of sleep. The warm wind
—the one they call the Levante—that blew
in the first scraps of dawn from Africa
churned the waves below from black to cobalt.
All at once the men were herded
to the land’s edge and shot dead. I’m told
on good authority there is a lesson here,
one I am in need of. For González Brilla,
twenty-five, the militia commandant,
his head wrapped in a red and black scarf,
the lesson was clear. Before the ragged volley
called in the day, he shouted it out,
but the wind whirling, the waves breaking
and those about to die abusing their gods,
no one heard. (Within a year Brilla himself,
bound and gagged in a damp cellar
off Calle Monteado, was shot just once
above his unfurrowed nape, and left
no written record.) On the ride back
to Barcelona it is reported—and now in print—
he told the driver that the air of Spain
was clearer now, although both men stank
of cordite. Years later his comrade,
Ramón Puig, told the English historian
that the night before the executions—
while oiling his Astra 9mm
taken from the body of a Guardia officer—
Brilla had rehearsed his speech:
“You, the guilty, who are about to die,
to leave the stage of history, behold . . .
behold . . . something or other” was all
Puig could ever remember. The widow,
Mercedes Brilla Robles, swears he never spoke
that way in his whole life. White-haired, shrunk
to almost nothing, she lives on state welfare
plus foreign contributions in a village
south of Perpignan. Her Spanish
is ragged now, her Catalan and French
perfect as she speaks of her girlhood days
as an anarchist rebel, the urban communes,
the battle for the telephone exchange,
the government betrayals, the journey
of the defeated on foot across the mountains
in February of ’39, the iron hunger
in the French camps, the terrible war
that followed, even her years as a hairdresser.
Unfortunately she can go on forever.
I know. When by accident I found Ramón Puig
three weeks ago in a ward of the tiny
public hospital in Santa Coloma
de Gramenet he remembered nothing,
not even the war, the people armed,
the glory days of ’36, and what came after,
much less Brilla’s words. Then by pure luck,
seventeen kilometers south of Castelldelfels,
this bright spring morning, we fo0und the place
where the road—impossibly narrow and steep—
hugs the coastline as it twists and climbs
until a brief widening appears.
My wife and I stopped and parked the rental car.
Hand in hand we walked to the edge
of the continent. No gunfire echoed
from the past, or if it did, the sea
silenced it. To the south, Sitges
with its fake Irish pubs and swanky new hotels,
to the north Barcelona barely visible
in its familiar, rosy shroud, dead ahead
the ancient impossible sea moving
slowly toward us as it broods on itself.
Can we hear them now, the words of Brilla,
the elusive lesson worth all those lives?
Above the cries of seagulls, the message comes
translated into the language of water and wind,
decipherable, exact, unforgettable, the same
words we spoke before we spoke in words.