I just heard from a couple of friends that Jack Gilbert passed away today, then I found press confirmation of it here. Just yesterday the LA Times published a wonderful article on this fine poet, and more will certainly follow. It really doesn’t matter where one places Jack Gilbert on the scale of American poets; time will work that out. What matters is that he set an admirable standard for commitment to the art—one I haven’t risen to myself (I have no talent whatsoever for asceticism), but which I’ve long held in mind as an ideal.

Gilbert had a gift for writing with directness and clarity. He generally refused to swaddle experience in metaphor, preferring to trust lucid image and statement; and he was no genius of poetic music: he stood about as far from Lowell and Plath, for example, as one could get.

Dudley Fitts, who in 1962 chose Gilbert’s first book, Views of Jeopardy, for the Yale Younger Poets Award, observed in his foreword that Gilbert’s poetry “beats with an energy derived from passion contemplated and ordered by a discriminating and always alert intelligence, a mind with a restless distaste for intermission. The poems make few elegant appeals to the ear; they move with a severer lyricism than the poetry of decoration and easy excitements will bear.” A good example of which is Gilbert’s early poem, “The Abnormal Is Not Courage”: 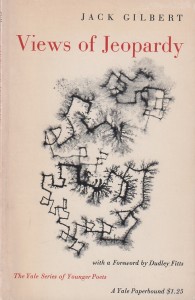 The Poles rode out from Warsaw against the German
Tanks on horses. Rode knowing, in sunlight, with sabers,
A magnitude of beauty that allows me no peace.
And yet this poem would lessen that day. Question
The bravery. Say it’s not courage. Call it a passion.
Would say courage isn’t that. Not at its best.
It was impossible, and with form. They rode in sunlight,
Were mangled. But I say courage is not the abnormal.
Not the marvelous act. Not Macbeth with fine speeches.
The worthless can manage in public, or for the moment.
It is too near the whore’s heart: the bounty of impulse,
And the failure to sustain even small kindness.
Not the marvelous act, but the evident conclusion of being.
Not strangeness, but a leap forward of the same quality.
Accomplishment. The even loyalty. But fresh.
Not the Prodigal Son, nor Faustus. But Penelope.
The thing steady and clear. Then the crescendo.
The real form. The culmination. And the exceeding.
Not the surprise. The amazed understanding. The marriage,
Not the month’s rapture. Not the exception. The beauty
That is of many days. Steady and clear.
It is the normal excellence, of long accomplishment.

And then there is the magnificent, epigrammatic “In Dispraise of Poetry”:

When the King of Siam disliked a courtier,
He gave him a beautiful white elephant.
The miracle beast deserved such ritual
That to care for him properly meant ruin.
Yet to care for him improperly was worse.
It appears the gift could not be refused.

Whatever may be said about Jack Gilbert and his work, it can never be said that he cared improperly for his gift.

11/14/12: Adding this video, thanks to the link in Ed Baker’s first comment here. A quietly powerful portrait….