We shall have to wait for the better-written obituaries, but this one will have to do for now, despite its peculiarities. This non sequitur, for example: “An opponent of the Vietnam war, he was ruthlessly self-critical.” Or: “He met Daniel Ellsberg and would suspect well before others that the leaker of the Vietnam war documents known as the Pentagon Papers was his college friend.” Well, we are in the realm of journalistic deadlines, and even major new outlets have experienced cuts on the editorial side.

And in the time it took me to write the above, the following and others have appeared, with various improvements and fresh information:

Paris Review Interview with Peter Stitt, “The Art of Poetry No. 43” 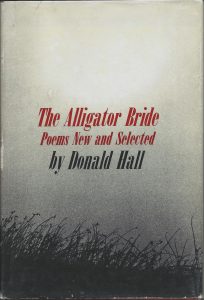 I first read Donald Hall when I picked up his 1969 collection The Alligator Bride: Poems New and Selected circa 1973 on a remainder table in the book department of The Denver Dry Goods store in downtown Denver. I was working at a B. Dalton Store on 16th Street, and “The Denver” was just down the street, with its haphazard selection of best sellers, travel books, cookbooks, and literary oddities. It was at The Denver that I’d picked up—always on sale, since I was a lowly bookstore clerk—George Seferis‘s Poems, translated by Rex Warner; Lawrence Durrell‘s memoir of his years on Cyprus, Bitter Lemons; and William Alfred‘s play in blank verse, Hogan’s Goat. In other words, The Denver book department’s oddity aligned with my own.

Anyway, among my favorites in Hall’s book was this Poe-ish poem, which remains a favorite even today:

The Man In The Dead Machine

High on a slope in New Guinea
the Grumman Hellcat
lodges among bright vines
as thick as arms.I n 1942,
the clenched hand of a pilot
glided it here
where no one has ever been.

In the cockpit the helmeted
skeleton sits
upright, held
by dry sinews at neck
and shoulder, and webbing
that straps the pelvic cross
to the cracked
leather of the seat, and the breastbone
to the canvas cover
of the parachute.

Or say the shrapnel
missed him, he flew
back to the carrier, and every
morning takes the train, his pale
hands on the black case, and sits
upright, held
by the firm webbing.

In checking the text of this poem, I was surprised to discover that Hall evidently revised the poem, as it appears in The Alligator Bride, when it was republished a year later in Robert Bly‘s  1970 anthology, Forty Poems Touching on Recent American History. I imagine the changes were made at Bly’s suggestion—poet to poet, friend to friend….