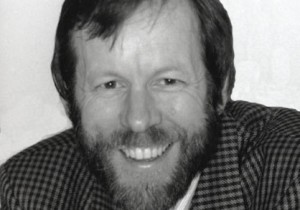 Well now this is distressing. The Irish poet Dennis O’Driscoll has passed away at 58—a loss to the art, for sure. But worse is the notice from RTE News in Ireland, the writer of which managed to eke out just 67 words about the poet. Sixty-seven words for the author of nine poetry volumes and scads of intelligent, insightful essays. O’Driscoll was by no means my favorite poet, but he was honest and skillful, erudite and funny, annotating life as lived in the world and not just in the head.
Among my favorite O’Driscoll poems is this elegy for a wonderful Orkney poet, George Mackay Brown:

in memory of George Mackay Brown

January. Wind bellows. Stars hiss like smithy sparks.
The moon a snowball frozen in mid-flight.
George is rocking on his fireside chair.

February. The sea loud at the end of the street.
Ferries cancelled. Snowdrops seem through dampness.
George is sitting down to mutton broth.

April. Cloud boulders roll back from the Easter sun.
The tinker horse, a cuckoo, in the farmer’s field.
George is taking the spring air on Brinkie’s Brae.

May. Scissors-tailed swallows cut the tape, declare summer open.
A stray daddy-long-legs, unsteady on its feet as a new foal.
George is sampling home-brew from his vat.

June. Butterfly wings like ornamental shutters. Day scorches
down to diamonds, rubies before being lost at sea.
George is picnicking with friends on Rackwich beach.

July. Another wide-eyed sun. Its gold slick pours like oil
on the untroubled waves. Shoppers dab brows as they gossip.
George is drafting poems in a bottle-green shade.

September. A brace of wrapped haddocks on the doorstep.
Mushrooms, snapped off under grass tufts, melt in the pan.
George is stocking up his shed with coal and peat.

November. Rain shaken out slantwise like salt. Hail pebbles
flung against the window to announce winter’s return.
George is adding a wool layer to his clothes.

December. Three strangers, bearing gifts, enquire the way
to byre and bairn. A brightness absent from the map of stars.
George’s craft is grounded among kirkyard rocks.

And this one, especially poignant now:

Time for sleep. Time for nightcap of grave music,
a dark nocturne, a late quartet, a parting song,
bequeathed by the great dead in perpetuity.

I catch a glance sometimes of my own dead at the window,
those whose traits I share: thin as moths, as matchsticks,
they stare into the haven of the warm room, eyes ablaze.

It is Sunday a lifetime ago. A woman in a now-demolished house
sings Michael, Row the Boat Ashore as she sets down the bucket
with its smooth folds of drinking water . . .

The steadfast harvest moon out there, entangled in the willow’s
stringy hair, directs me home like T’ao Ch’ien: A caged bird
pines for its first forest, a salmon thirsts for its stream.