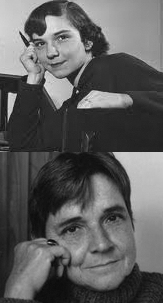 How many thousands pass on every day? How many poets? I don’t have the math skills to figure that one out. All I can say is that many more move “on to the next” without comment from me because, simply put, I don’t know them or their work. Mourning would feel disingenuous.

The loss of Adrienne Rich is different. Although I never had the opportunity to meet her, her passing feels personal. I remember with strange clarity (strange because the moment itself was unremarkable) picking up a remaindered copy of Snapshots of a Daughter-in-Law: Poems, 1954-1962 at a bookstore that has long since disappeared into the impassive façade of an office building. I have it still, and return to it now and then; though it was her later work that knocked my socks off, book by book, uneven as they all were (their diaristic framework, each subtitled Poems: [Year] – [Year], almost daring her readers to expect perfection). I think it’s the fact that Rich acted on Rilke’s Apollonian injunction: You must change your life. How difficult to do! How difficult to sustain once it’s done!

Adrienne Rich began as a formalist writer of the early 1950s, but by the middle of that decade she was already shaking off the niceties of traditional form, the proprieties of domestic content, the politics of post-war silence. No matter what she turned her emotional-intelligence to, she made it glow, made it musically thoughtful. Here are some examples, the first two from that book I bought in the summer of 1969, the third from the extraordinary collection Telephone Ringing in the Labyrinth: Poems 2004-2006: 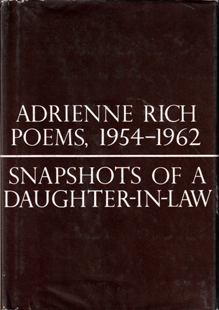 Last night we sat with the stereopticon,
laughing at genre views of 1906,
till suddenly, gazing straight into
that fringed and tasselled parlor, where the vestal
spurns an unlikely suitor
with hairy-crested plants to right and left,
my heart sank. It was terrible.
I smelled the mildew in those swags of plush,
dust on the eyepiece bloomed to freaks of mould.
I knew beyond all doubt how dead that couple was.

Today, a fresh clean morning.
your camera stabs me unawares,
right in my mortal part.
A womb of celluloid already
contains my dotage and my total absence.

Either you will
go through this door
or you will not go through.

If you go through
there is always the risk
of remembering your name.

Things look at you doubly
and you must look back
and let them happen.

to maintain your attitudes
to hold your position
to die bravely

but much will blind you,
much will evade you,
at what cost who knows?

The door itself
makes no promises.
It is only a door.

walking into a room, turning to look at you, sight for sight
Should be yet I say there is something

more desirable:       the ex-stasis of galaxies
so out from us there’s no vocabulary

but mathematics and optics
equations letting sight pierce through time

into liberations, lacerations of light and dust
exposed like a body’s cavity, violet green livid and venous, gorgeous

beyond good and evil as ever stained into dream
beyond remorse, disillusion, fear of death

or life, rage
for order, rage for destruction

These impersonae, however we call them
won’t invade us as on movie screens

they are so old, so new, we are not to them
we look at them or don’t from within the milky gauze