A Taste for Apocalypse

Browse: Home » A Taste for Apocalypse

A Taste for Apocalypse 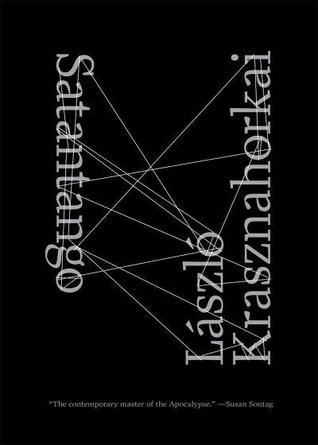 I had all kinds of reasons for wanting to like this book. First, my daughter gave it to me for Christmas; she spent enough years in the book business to know what might appeal to me. And she was right: I had read a review that made the book sound right up my alley—something dark, apocalyptic, Poe-ish. (I love Poe.) So I embraced the reading of it with relish. 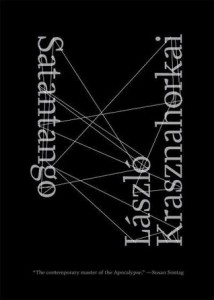 I have to say, though, that the novel disappointed me. László Krasznahorkai‘s Satantango is a dystopian amorality play. Never mind the human figures in it: the main characters are howling wind, brutal rain, mud, and decay. I use the term “figures” for the people in Satantango because the author doesn’t aspire to make them individuals; each one is merely an emanation of main characters, those chaotic forces of nature; these emanations arise and sink back into their elements in single blocks of prose unrelieved by paragraph breaks. The story, such as it is, promises revelation but doesn’t deliver it, delivering instead a fatalistic circle. This circularity is nothing like the famous circularity of Finnegans Wake, which is a hilarious, flourishing, deeply erotic book. Satantango is anti-Eros (as the title hints), the author’s considerable inventiveness and skill at making long, breathtaking sentences wasted on quasi-symbolic figures who inspire only antipathy.

Now, I’m not an idiot. Susan Sontag admired Krasznahorkai; the estimable James Wood claims that the author is a “visionary.” The book has inspired a 7-hour-plus film by Hungarian director Béla Tarr. There could well be something I’m missing. And I can only admire how the excellent Hungarian-born British poet George Szirtes leverages his own talents to bring over into English sentences like this, in which we are introduced to the thinking of a personage known only as the Doctor:

His imagination was bewitched almost to the point of paralysis by the notion that this estate with its rich, generous soil was, only a few million years ago, covered by the sea … that it had alternated between sea and dry land, and suddenly—even as he conscientiously noted down the stocky, swaying figure of Schmidt in his soggy quilted jacket and boots heavy with mud appearing on the path from Szikes, hurrying as if he feared being spotted, sliding in through the back door of his house—he was lost in successive waves of time, coolly aware of the minimal speck of his own being, seeing himself as the defenseless, helpless victim of the earth’s crust, the brittle arc of his life between birth and death caught up in the dumb struggle between surging seas and rising hills, and it was as if he could already feel the gentle tremor beneath the chair supporting his bloated body, a tremor that might be the harbinger of seas about to break in on him, a pointless warning to flee before its all-encompassing power made escape impossible, and he could see himself running, part of a desperate, terrified stampede comprising stags, bears, rabbits, deer, rats, insects and reptiles, dogs and men, just so many futile, meaningless lives in common, incomprehensible devastation, while above them flapped clouds of birds, dropping in exhaustion, offering the only possible hope.

This sentence is an extreme example, but the book is full of similar passages, at once headlong and bogged down in introspection. As much as I admire the sheer skill of it, Krasznahorkai’s style doesn’t compensate for a vision that is bleaker than Beckett‘s, a more or less humorless version of Kafka. It’s as if Faulkner had tried to write Go Down, Moses without the substructure of family ties, Southern culture, and Biblical reference.

As I noted above, Krasznahorkai’s story turns back on itself in the end. The last couple of pages repeat verbatim the opening pages of the book. I’m not sure what effect the author intended, but for me it felt like sinking deeper into some primeval mud—that sick sensation of having one’s boots sucked off one’s feet. I didn’t exactly finish Krasznahorkai’s book: I escaped it.

Of course, the problem could be simply that I’ve lost my taste for apocalypse.