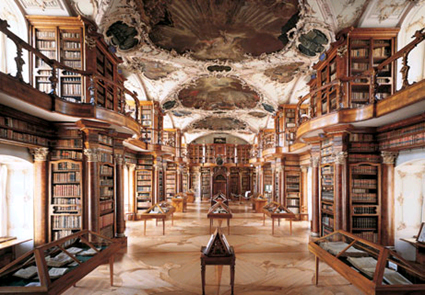 An essay by Fanny Howe sent me in search of what she calls “a little poem by Priscian, the Irish monk who stayed in Switzerland in the ninth century.” Here’s the poem:

A wall of forest looms above
and sweetly the blackbird sings;
all the birds make melody
over me and my books and things.

There sings to me the cuckoo
from bush-citadels in grey hood.
God’s doom! May the Lord protect me
writing well, under the great wood.

According to what appear to be authoritative posts (here and here) on the Lux Occulta blog, the 9th century poem was written not by Priscian (Priscianus Caesariensis) but “on the margins of a book on Latin grammar” by him. Our commentator notes that the poem itself was written by one of four scholar-monks residing in the Abbey of Saint Gall: “Maelpátricc, Coirbbre, Finguine, [or] Donngus.” I don’t know why the names themselves seem so poignant to me, but they do.

Our commentator also notes that the translation is by James Carney, from his book Medieval Irish Lyrics, which I’ve added to my seemingly endless list of books to read someday.